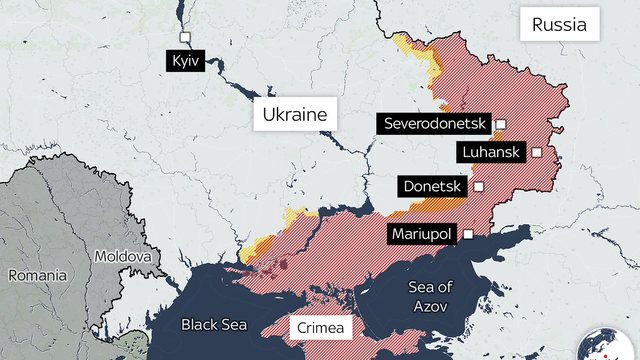 For months a narrative has been built and fed by Western intelligence that Russia is struggling to achieve its primary objectives in Ukraine.

We saw a complete withdrawal from the north and west and a refocusing on the Donbas in the east, where the fighting has sometimes resembled a stalemate.

But now, according to analysts, the momentum, at least in the short term, appears to be with Vladimir Putin's forces.

So is the war now going in Russia's favor?

Sir Richard Barrons, former head of the Joint Forces Command, said: "I think in the short term it is.

Russia will feel that it is now reduced to just a little less than a quarter of Ukraine. It knows that Ukraine does not have the military ability to throw them out and will feel that there is some fatigue in the world to face the consequences of this war".

Over the past week, Ukrainian forces have withdrawn from Severodonetsk, the largest remaining part of the Luhansk region that was under Kiev's control. Luhansk is part of Donbass.

Territory in the southern belt has also been consolidated, but while militarily there has been progress, Moscow is aware that "strategically" it will lose that war, says Sir Richard.

"It's been isolated from the international community. It's a poor country. Its economy will probably shrink by 15% this year. And if Ukraine is allowed to re-equip and rearm, then Ukraine will turn the military tide at the right time." and will start to push out the Russians. And so for Russia, maybe time is everything here," the expert added.

He said Russia's capture of Severodonetsk is a "tangible victory" but a tough fight awaits in nearby Lysychansk, the last major city of Luhansk still held by Ukrainian troops.

Asked about an attack on a shopping mall in Kremenchuk that killed at least 18 people, he said Russian President Vladimir Putin was a "terrorist".

"This is a very critical point. There will come a time in the not-too-distant future when the Russians will have control of these two provinces of Donbass, which is what their strategic game is at present.

Now, the West can tell the Russians to go away. The Russians will not go voluntarily and who will make them go?

NATO will not launch an operation to throw them out. So there may be a new reality where part of the sovereign territory of Ukraine remains occupied by the Russians for a long time ," he said.