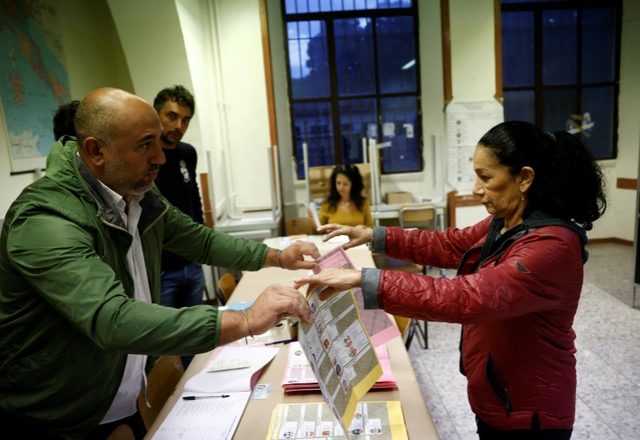 Voting centers have opened for millions of Italians, who will choose the country's new prime minister today. The odds are that the far-right coalition led by Giorgia Meloni will win the election.

More than 50 million Italians eligible to vote on Sunday, 4.7 million of whom live abroad, will elect new representatives to a parliament with 200 members for the Senate and 400 for the Chamber of Deputies.

Exit polls are expected later in the day, but the official results will not be announced until tomorrow. The election campaign began in the summer after political infighting led to the collapse of outgoing Prime Minister Mario Draghi's government in July.

Giorgia Meloni, leader of the far-right Fratelli d'Italia (Brothers of Italy) party, has dominated the campaign, with 25 percent, according to the latest poll published on September 10.

That would put Meloni on track to become Italy's first female prime minister at the head of a right-wing coalition that includes anti-immigration populist Matteo Salvini and Silvio Berlusconi.

The rival Democratic Party led by Enrico Letta, with 22 percent, has failed to form a broad alliance with other center and left parties, reducing its chances of winning the election.

Giuseppe Conte's Five Star Movement, which observers considered a party in the making, was polled with 13 percent after a strong campaign in the south of the country.

The Italian election is taking place amid an energy crisis, widespread disillusionment about the views of politicians and questions about the country's future stance towards the European Union.

While Mellon's coalition has maintained a united front on some key policies, including opposition to what it calls "illegal immigrants" and tax cuts, fissures have emerged among its leaders on fiscal and foreign policy.

On the fiscal front, Meloni has toed Draghi's line by refusing to increase Italy's record debt, while insisting on capping the price of gas and decoupling it from energy costs. Salvini takes a different view, calling for 30 billion euros ($29 billion) more debt to help struggling businesses and families.

Meloni has staunchly supported sanctions against Moscow, while Salvini insisted they should be reviewed. Berlusconi, a longtime friend of President Vladimir Putin, came under fire on Thursday night after he said the Russian leader only wanted to replace Ukrainian President Volodymyr Zelenskyy with a government "made up of good people".