Çomo and Bozo in the lists of SP, Meta: Integrity is important, citizens give a message to politics

The winning company for the construction of Vlora airport is announced, Rama: It has an Albanian flag, it belongs to Behgjet Pacolli

One day before the registration with the CEC, the name of the slogan of the opposition coalition is revealed 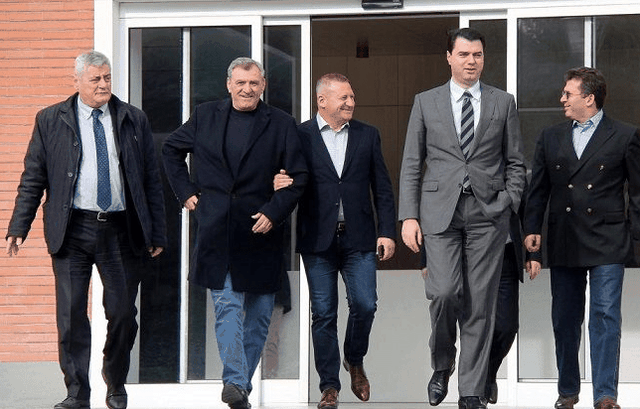 As the deadline for signing the agreement on the format of the coalition with which they will compete on April 25 is coming to an end, it is learned that the united opposition has decided to baptize its group with the name "Albania wins", a name similar to its slogan for this election campaign.

According to Top Channel, the extra-parliamentary opposition is expected to register the "Albania wins" coalition in the Central Election Commission on Wednesday, along with the number of candidates to be nominated by each political party within the coalition for each constituency, while the Democratic Party will be the leading party. coalition.

For Lulzim Basha these are hours of intensive meetings, as well as for allies coming and going in his office.

So far, Basha has not yet closed negotiations with the leader of the Republican Party, Fatmir Mediu for the positions that will belong to him in the list of the Democratic Party. Details have also been left open with Idrizi's party.

Politiko after a few days of consultation with Democratic Party exhibitors in the center, members of the Selection Committee of Candidates for MPs, sources clos...

Rama's Movement / After the conflict with Gjiknur, he ousts Dritan Leli from the municipality, asks him to run for deputy

When we are a few days away from the submission of the lists of candidates for MPs by the political entities participating in the April 25 elections, the medi...

Below you will find the telegraphic profiles of LSi political leaders in the 12 regions of the country, compiled with sources and the consultation of experts on...

The candidacy of Çomo and Bozo in the Socialist Party, Nard Ndoka: Rama is us...

The concession of the quay of the Port of Durrës / PD sues in SPAK Balluku, t...

Basha in Unit no.9: I will return the administration to your function, we als...

Kryemadhi: I have messages about how psychological pressure is being exerted ...

Rama asks Luigi Di Maio to recognize Albanian patents: They are stuck in the ...

Rama starts his two-day visit to Italy, the agenda is revealed

The winning company for the construction of Vlora airport is announced, Rama:...

Reconstruction / Rama introduces Bozon as SP candidate; The engineer does not...

The candidacy of Çomo and Bozo in the Socialist Party, Nard Ndoka: Rama is using them as characters

Rama asks Luigi Di Maio to recognize Albanian patents: They are stuck in the unique corridors of the Italian bureaucracy

Has defeated cancer twice, has passed two pandemics; the oldest person in the world will hold the Olympic flame

Patozi introduces another name for Tirana: She will be the first woman on the list of Democratic Obed candidates

Went an hour late to Sanremo, Ibrahimovic stops motorcyclist: Luckily he was a Milan fan

Rama's Movement / After the conflict with Gjiknur, he ousts Dritan Leli from the municipality, asks him to run for deputy

The reason why Romain Gavras is no longer with Rita Ora

Covid figures are still high, 21 victims in the last 24 hours

Rama starts his two-day visit to Italy, the agenda is revealed

According to recent statistics, breast cancer is already the most common form of cancer

Sprayed it with gasoline and set fire to the Education Directorate in Fier, 33-year-old arrested

Meta comments on Çomo and Bozdo's candidacy 'as an old socialist': Citizens should look carefully at the lists

"Rebelde", the first two songs of the virtual concert, are back

"This one with E makes you magic", Rama read the cup, Kryemadhi: E and L shook their heads, wait for the next series

EP report on Albania, MEP Lega wants to be corrected: Conditionality is vital in this context

Grenell-EU: Leave the words and start issuing visas for Kosovo

"Who wins the April 25 elections", Evi Reçi brings for the first time in Albania the famous astrologer Susan Miller

"Weather the famous envelope with 1 million ALL", the citizen denounces Najada Çomon