At least 5,415 people have lost their lives in the earthquake in Turkey and Syria

Tirana/ Accident on 'Zhan D'Ark' boulevard, a woman is injured

The affair of the incinerators, SPAK starts investigations against Arben Ahmetaj

How has law-making degraded in the Parliament of Albania 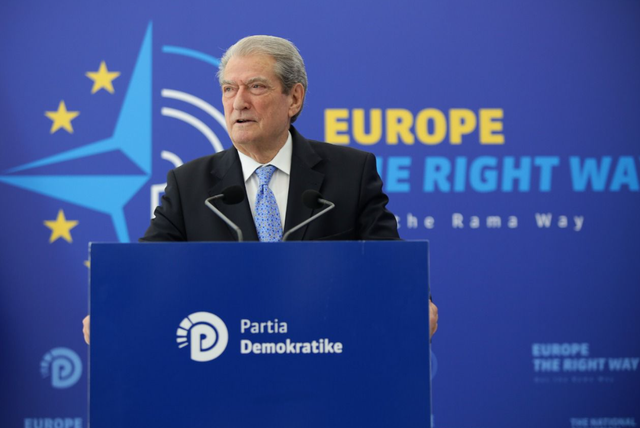 A day before the protest, the leader of the opposition, Sali Berisha, said that the summit that will be held tomorrow in Tirana constitutes the most powerful support for the PD and the opposition people.

"In this context, this summit constitutes the most powerful support for the DP and the opposition people. For the sole fact that this party, after the overthrow of the Orwellian dictatorship of Edi Rama's fathers, currently transformed into a party of drugs and crime, I mean his party, established the new democratic order in Albania, based on European values .

The summit is a great support for the Albanian democrats, because it is this party in the government, which signed the Stabilization-Association Agreement, which liberalized visas with the success of its reforms, received the recommendation for the status of the candidate country. In this aspect, tomorrow's summit constitutes the greatest support for its democratic aspirations and ideals" , said Berisha.

In the statement from the blue headquarters, the chief democrat expressed his belief that the opposition people will fill the streets and squares of Tirana tomorrow.

"But tomorrow we, the opposition people, will fill the streets and squares of Tirana in a sign of protest, in a powerful protest precisely in defense of European values, terribly endangered and threatened by Edi Rama and his regime.

Every Albanian who loves this country, who wants freedom, human dignity, his and his children's future in freedom, and who believes that the condition of all conditions is a free vote, join us in the square tomorrow, to "proved to the European leadership that we are in a battle with the fierce enemy of the free vote of the Albanians, Edi Rama", said Berisha.

He further added that the protest aims to convey to the European leaders that Edi Rama has violated the free vote and is an accomplice to crime.

"I know that those who gather tomorrow cannot save us from the theft of public funds and public assets, but at least they should know that when they shake hands with him, check their pockets.

He is actually the chief thief of Albanians, of all times. I know that no one will come to free us from the narco-state, we and only we will be freed from it, but it is vital to prove to them that the man standing at the table in the name of the Albanians is a Noriega with red sneakers Adidas. It would be unforgivable if we were not all in the biggest, most magnificent protest that Albania has known in its history", said Berisha, among other things.

Food/ Europe makes purchases based on costs, Albanians are guided by taste

95% of the country with temperatures below 0°C, the weather forecast

The incinerator of Elbasan, Lala: Stela Gugallja has self-identified and presented himself to the Austrian authorities

'They met journalists, academics', the expert shows the special method of investigation by FBI agents in Albania for the McGonigal case

Berisha warns: I will tell the Albanians how the British ambassador deceived the officials in London

Berisha publishes the list of 'Aktiv1st': There are 32 prosecutors and hundreds of policemen. Administration is returning to the SP section

Divisions aside, the February 11 protest unites the democrats

Kevin sends a drone to Luiz, her sister confirms it

"Hundreds of millions were stolen with firecrackers", Berisha tells why Veliaj has not been able to meet the citizens for 3 years

Berisha: Rama paid "murderers to kill" the opposition, one of the most powerful people

Berisha with FRPD youth: This country today needs to be saved more than ever. In 8 years, 35% of the population left

"Lunar geometry can cause...", the researcher who predicted the powerful earthquake in Turkey makes another post

The number of Albanians with residence permits in Greece drops significantly

The "McGonigal" case, Lubonja: The connection with Rama, more serious than the one with the Russian oligarch

The porter's wife survives the earthquake in Turkey, the dog saves her life

The 19-year-old man from Tirana was sentenced for stealing the book 'Balloon Hunter': I had no money to buy it

The woman was hit by a car on the "Zhan D'Ark" boulevard, the woman died in the hospital

At least 5,415 people have lost their lives in the earthquake in Turkey and Syria

The "McGonigal" issue, the Assembly accepts the opposition's request for the motion with debate, will Rama respond?

Tirana/ Accident on 'Zhan D'Ark' boulevard, a woman is injured

ChatGPT now has a rival, what you need to know about "Bard"

They spread panic about the earthquakes, 4 people are arrested in Turkey

It was described as 'bad and disrespectful', the friend of Selena Gomez reacts for the first time

Rumor has it that Rita Ora might be pregnant

The affair of the incinerators, SPAK starts investigations against Arben Ahmetaj

Prison sentence for Alda Klosin, the lawyer says: The cleaner's statements are false, the money was left to her by her uncle

How has law-making degraded in the Parliament of Albania

Connections with the Russian oligarch and Rama's involvement, Charles McGonigal appears before the Court on Thursday

Under the charge of 3 criminal offenses, the court leaves Alda Klos in prison

Tragic earthquake, Turkey declares a state of emergency for 3 months in 10 provinces

Cheese and butter prices, from February 15 increase up to 37% in minority markets

About 20 Syrian jihadists escape from prison after the earthquake

Found a photo with McGonigal: I've met him a few times, but I won't give details

What does Alda Klosi suffer from? The lawyer refuses to talk about the health of the former official

The tragic earthquake, the Albanian search and rescue team and medical aid arrive in Turkey

Good morning! Politiko.al brings you a flash of news from the country in 'Posta e morningu'. To receive the 'Mail' every morning by email, write to us at i...

Berisha publishes the list of 'Aktiv1st': There are 32 prosecutors and hundreds of policemen. Administration is returning to the SP section

The head of the Democratic Party, Sali Berisha, has denounced that 32 prosecutors and hundreds of police officers are registered in the "Aktiv1isti" applicati...

In an interview for the Voice of America, the former special agent of the Federal Bureau of Investigation, Coleen Rowly, talks about the case of the former se...