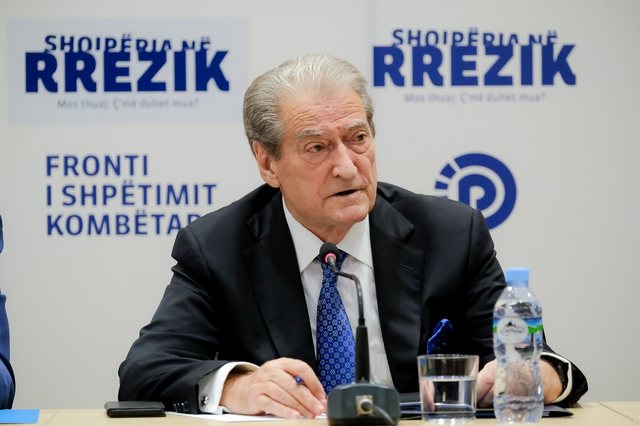 The head of the Democratic Party, Sali Berisha, accuses Prime Minister Edi Rama of coming out against Albin Kurti and with this, according to him, seeks amnesty for Serbian crimes in Kosovo.

Speaking at the meeting of the National Council of the DP, Berisha said that Rama, in his attitude towards Aleksandër Vucic and Belgrade, kicks over the blood of tens of thousands of Albanians in the last war alone.

The request that he directs to Vucic publicly, perhaps privately, for the recognition of Kosovo, has been fully approved by his boss.

In fact, Vuçiçi is never upset by this demand, of course he multiplies it by zero and that he multiplies the demand for the recognition of Kosovo by zero, it is clear to every citizen of Kosovo, Albanians, politicians, and Serbs as well. With this request, alibi, he covers all the services, the advocacy he provides to Belgrade, the Moscow-Belgrade axis, his entire anti-Albanian attitude.

Believing that the public request to Vučić for the recognition of Kosovo was placed as a mask, he will be able to use it to cover his services to Belgrade, the justification for not implementing the sanctions from Belgrade, the justification for the transformation of Serbia these days in the background of very important of Russia, de facto he defends with the 'Open Balkans', precisely this axis, this policy.

Edi Rama, in his attitude towards Aleksandër Vucic and Belgrade, kicks over the blood of tens of thousands of Albanians in the last war alone.

What are you, sir, tell us, that wants to archive the genocide and war crimes committed by Serbia in Kosovo. What authority do you have except slavery to Vučić.

How can you do such a thing. I explained to the Albanians, there are 1500 children burned alive, killed, butchered in the last war.

This vassal of his goes from summit to summit, from meeting to meeting, protecting a little Putin in the region, giving advice to Europe and the world, fully justifying Vucic's alignment with Russia and against EU sanctions, presented the request for the implementation of sanctions by Vucic as a dangerous request for the peace of the region.

The truth is that behind Rama's defense of the Moscow-Belgrade axis, lies his vassalage to Belgrade and indirectly to Moscow. The kicking that he does to the national interests of Albanians remains," said Berisha.