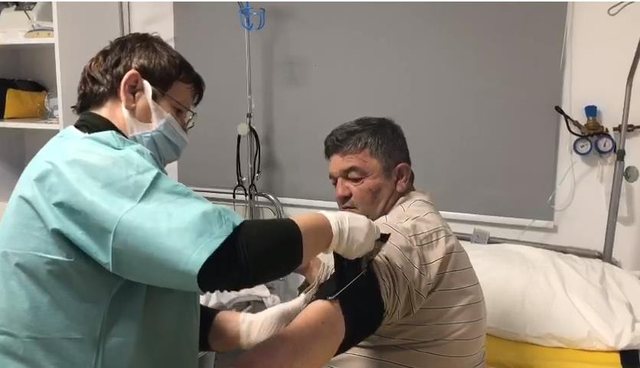 President Ilir Meta has denounced that an SMI member was raped by the relatives of the mayor of Poliçan, Adriatik Zotkaj, for wearing a hat with the SMI logo on his head.

After the attack, according to Meta, Luan Tare, an SMI supporter, was hit with hard objects on the head and body by the nephew and brother of the Mayor of Poliçan, Adriatik Zotkaj and 5 other people.

I just talked to my old friend Luan Tare, who was injured in the treacherous attack of the reborn gang of the Municipality of Poliçan. I learned that he was treacherously attacked by the gang, which rapes the people of Poliçan, just because he wore a hat with the symbols of his party on his head.

I wished him well and tomorrow I will take him for a more specialized check-up in the hospitals of Tirana. I promised the regime of violence three more days and it comes to an end forever. Albania is not defeated by the violence of the wicked and the villains!

It is reported that Pitko was entering his palace when he was hit with hard objects on the head and body by the nephew and brother of the Mayor of Poliçan, Adriatik Zotkaj and 5 other people.

Tare is located in the Health Center "Pëllumb Dollani" in Poliçan, where he is receiving treatment. Tare has stated that he has been constantly threatened during the last 2 months by SP Poliçan members to resign from the SMI.

"I was just running home. Without entering the entrance, some 7 boys came out, one of them called me, I saw that he was about to hit me, I climbed, but I was caught. I was beaten and bastardized. I knew them, they are related to the mayor, one was his nephew and the others were idiots. Then I got on the phone 129.

When the police came, the mayor's brother came and did not let me make the report and hit me. I escaped, I told the police to hold on until I entered the house. I told them aman I died I have a heart. My soul ached. I was told will I wear the SMI hat anymore? They have been pressuring me for three months, people have introduced me, "we kept them, but they would kill and they would do it". It has been three months since the campaign started. "My head hurts a lot," he said.