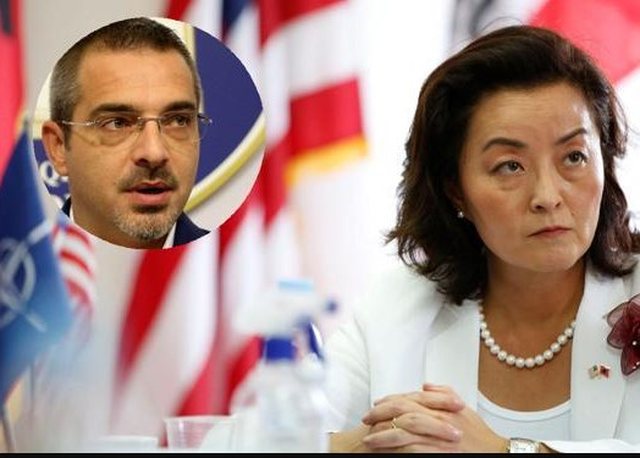 The US Ambassador, Yuri Kim, mentioned as a concrete example the case of the former Minister of the Interior, Saimir Tahiri, who was sentenced to prison, when she was asked about the results of SPAK in the fight against corruption and crime in our country.

Invited to 'Opinion', Kim said that before the justice reform, no one thought that corrupt ministers or officials would be able to face justice. According to her, SPAK has put an end to impunity for persons who are protected because of power.

Asked about the investigation into the incinerator issue, Kim responded curtly by saying "let SPAK do its job."

Part of the interview

Ambassador Kim: When was the last time, when was the last time Blendi when two ministers, two powerful ministers, of the ruling party, immediately after they left office, when was the last time when two ministers were put in prison ? Did you think that Saimir Tahiri would go to prison? We bet you didn't think so. I'm sure most people thought, here is a person who will never be brought to justice because he is powerful. Here is a person who is protected. Or not? That time of impunity is coming to an end. The same is shown in our worldwide designations. Therefore, the idea that this justice is selective, I think reflects the impatience and desire to see justice...

Ambassador Kim: ...to go faster. I think there is a close connection…

Blendi Fevziu: The most important thing in cases is that...

Ambassador Kim: …you have to have results, right? Do you know what I noticed in my study of criminal prosecutions and justice in Albania? I have seen that there were many criminal prosecutions opened before the justice reform, shortly before SPAK was established, every year, the special prosecutor's office, here, there, everywhere opened many cases...

Ambassador Kim: Who went to jail? Which minister was put in jail?

Ambassador Kim: Not very few people. No minister has ever been put in jail. Never.

Ambassador Kim: Oh, really? Agreed. But it is very rare.

Ambassador Kim: And I think we are seeing SPAK deliver results. Therefore, I think that, if I were Albanian citizens, I would also have impatience. But I wouldn't lose faith either, because it's moving forward.

Blendi Fevziu: But there was one case, for example, which everyone followed, such as the issue of incinerators. And people say, I don't vouch for the facts, but every day, in every studio, they bring out facts, papers, documents, and we still don't have anything concrete.

Blendi Fevziu: Are you working in that direction?