"You reminded us of the Stalinist period", reacts the European Union of Controllers: We are terrified! Release our Albanian colleagues 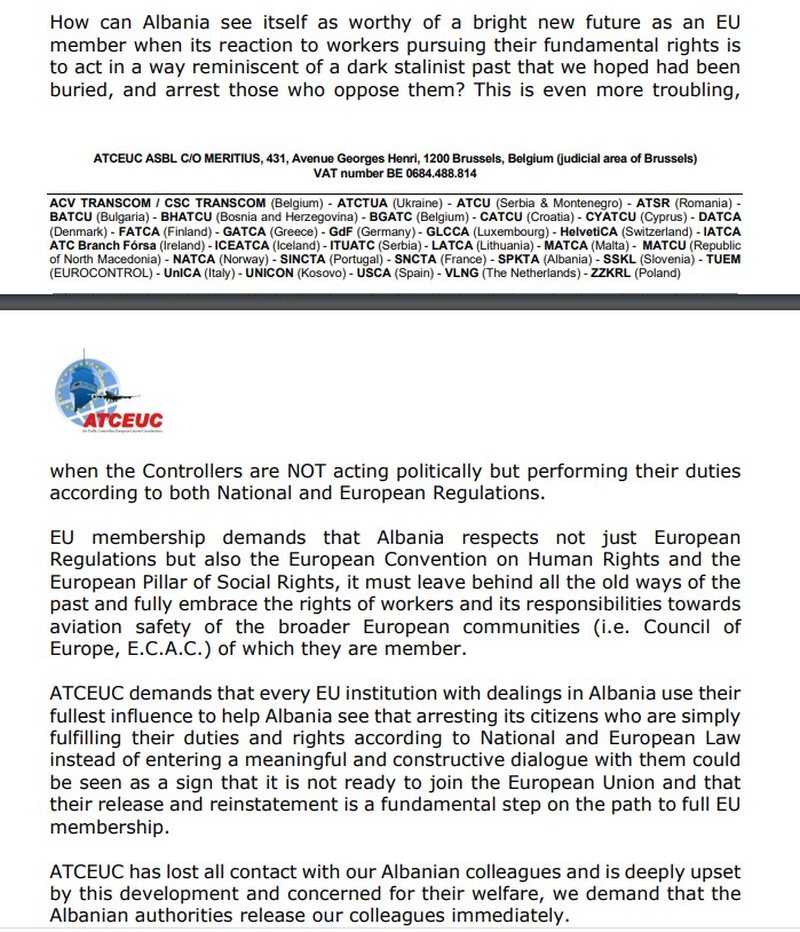 The European Union of Controllers has reacted after the imprisonment of the three air traffic controllers of Mother Teresa Airport. The union calls on the judiciary to release their colleagues immediately.

" ATCEUC is horrified by the latest news from Albania. The Air Traffic Controllers who last Thursday met with their President to express their fears and concerns about their treatment by Albcontrol employers were fired immediately and then have been arrested.

In a country aspiring to become an EU member, it is unacceptable for essential, critical security workers to be fired and arrested simply for carrying out their duties in accordance with EU regulations or for making concerns of their employer when their employer refused to listen to an employer who is responsible for the safety of passengers traveling through the Albanian sky.

Albcontrol has unilaterally reduced the salaries of their employees by up to 70% without consulting or talking to the Unions which represent their employees.

Albcontrol has rejected any request from the Unions to negotiate a responsible collective agreement to resolve this crisis, a position which has placed its employees under tremendous additional stress in the midst of the global crisis.

How can Albania see itself worthy of a bright future as an EU member state when it reacts in this way to workers pursuing their fundamental rights by acting in a way reminiscent of the dark Stalinist past we hoped for? had he been buried, arresting those who opposed him? This is even more worrying, when the Controllers do not act politically but perform their duties according to national and European regulations " , writes among others in the official reaction of the European Union of Controllers.

He further adds that EU membership requires Albania to respect not only European Regulations but also the European Convention on Human Rights.

"ATCEUC has lost all contacts with our Albanian colleagues and is deeply upset by this development and concerned about their well-being. We demand that the Albanian authorities release our colleagues immediately ", writes among others in the press reaction the European Union of Controllers. / Politiko.al /