Anjeza of Preç Zogaj did not wake up, while good literature does! 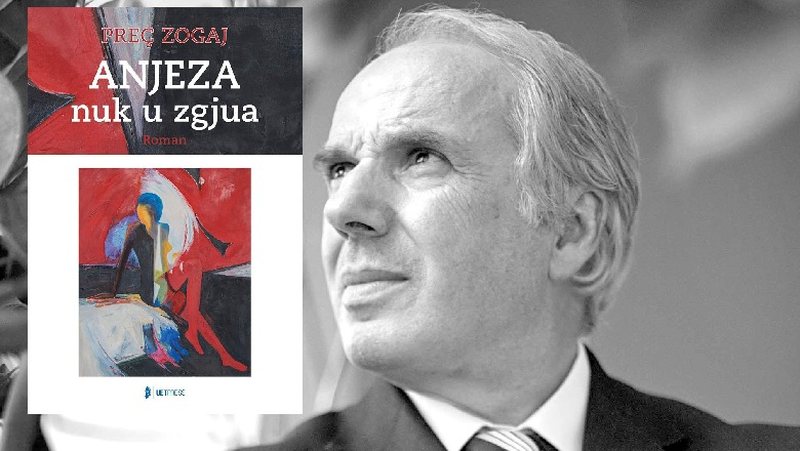 In Preç Zogaj's prose, it is the memory that gives full color to the narrative, which follows the straits, the twists of memory, the impressions, the mistakes, the misunderstandings, and its traps.

This taste is left by the journey in the life of David Gjika in the novel "Anjeza did not wake up", published a few months ago by "UET Press", where Preç Zogaj has fun at the expense of the truth.

A subject of love as great and equally tragic, which summarizes in each of its acts the anthropological signs of a man (David Gjika) of a city (Lezha) of a country (Albania) and of an era (that of communism, the years' 80), ideologically, culturally hardened in the face of an invisible but ubiquitous enemy that shapes the historical existence of humanism. Historical time becomes the cultural time of writing after the resistance of memory.

This novel by Preç Zogaj is a personalized investigation of human nature for that of David and Anjeza, in the relationship between dreams and opportunities in the absence of freedom. In this illusory match, in this alternation of visions, a subject with strong autobiographical influences begins. Only one thing makes these two sides of this vector compatible - love, which “speaks little and in a low voice, something that is written and read in a language that is understood without knowing it on the forehead of the one who feels it, love there is no hunger in the hands and eyes. Has the blind willingness to sacrifice for the other or the other. David Gjika is one of us in the years of dictatorship as much as the writer himself is a guy passionate about books and knowledge, as the only window on the forbidden world, but he like many others carries a flaw, a sign, a stain on biography,

In this endeavor, David has only one ally, literature, which projects him into collective memory as an authentic person rather than a novel character.

Anjeza, this fragile sinner and an unwavering Christian in the visions beyond, is just as much a beautiful girl, an Eve who "bites" the apple, taking erotic or sex to creative edges in contemporary Albanian literature. Anjeza takes death as punishment or rejection of the impossibility of being happy in the hereafter. In the passion that unites David with Anjeza, there is nothing banal. Everywhere through it appear the vibrations of a passion, contoured by the aesthetics of beauty. Not coincidentally, David is handsome or the angelic Angel. Neither their contextual unhappiness nor their final separation from death by poison is accidental. The reader must find for himself why this happens, that boundary between ordinary and unrepeatable things, of those who become monotonous and every day with those who do not accept this status, but become invaders of memories, fermenting narratives like that of Preç Zogaj with the good literature itself that we do not encounter often. Yes, love is resistance to dictatorships and dictatorships, but I can expect theirs when it is not a dominant feature of society. It is harshly judged by one who does not have it. Zogaj tries this conclusion as well.

He (the reader) needs curiosity to climb the structures of the narrative, to understand what unites them and what divides David and Anjeza, what they want and what they get, from when and when they are hit, how much one dominates the circumstances and how many they frighten and oppress him, how much he plows the good and the bad within himself, the beautiful and the ugly, the good and the evil, whose triumph gives meaning to life or defeats it? !!

A nostalgic reader, if I will insist on looking for the painting or photograph of Lezha with writers, teachers, painters, doctors, apparatchiks, prominent individuals through the game of combining names with surnames, can also build the area of ​​that season, but knows what he would gain if reading does not serve to understand the time and accept that each of us is destined to become part of a narrative that conveys emotions rather than the data of the era as a reflective experience.

The city loses its local dimension, as does the capital in the grooves of hope and prohibition where it seduces David and Anjeza, pushing them into the dough of universal subjects, where one dies, leaving the other the hostage of narrative, of transmission of what is considered great love, great suffering, great absence, which is compensated only by such a narrative in order to help the reader to better understand himself and time, what always remains as a standard, from where history always resumes with us once upon a time…!

Ah, for style, poetry is ubiquitous in the prose of the writer Preç Zogaj, leaning mostly from the inner world of all those with whom he has realized the story of David and Anjeza, where the lyrical dimension seems like a justified opposition of political pathos, the very long kiss itself against dry dogma. Perhaps Preç Zogaj would have liked to write a lover's survival manual. He has not achieved, but the other yes, that familiar saying that love survives death, surpasses it even when struck by it of course. But he does not deny the advice to insist and insist as affirmative morality, the fact that we should not be impressed by the contemptuous of the socio-psychological-ideological hindrance of feelings, the object of which is love itself, but we must insist, dare, to love that only in this way does man justify himself on earth. Anjeza did not wake up, but the good novel yes.