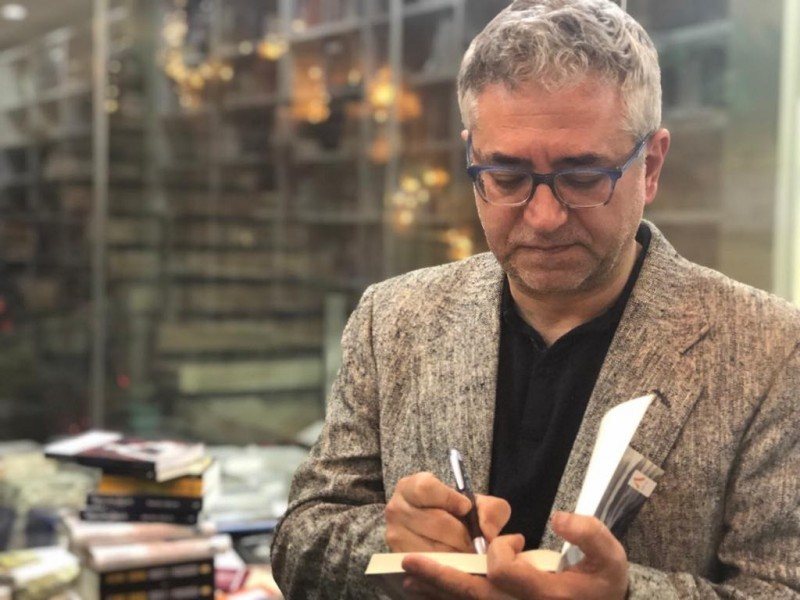 Writers, usually, build their body of work around a few literary “obsessions”. Borders are my own main literary obsession, one I would never have developed (at least, not to this perversely intense degree) had I not been born in Albania during the Cold War. In fact, borders and crossing them became my generation’s obsession in Albania.

We grew up during the most miserable, paranoid and violent years of the Albanian Stalinist regime of Enver Hoxha – when the isolation of Albania from the outside world, especially after the breakdown in relations with China, became absolute.
One of the most ludicrous and painful memories of my childhood and teenage years are the grey military bunkers popping up everywhere: from seashores to town centres. You could see bunkers built sometimes even in front of the entrance to public toilets – which usually were considered a horrible place to visit – as if the military genius suspected that our ubiquitous enemies (the Americans and the English being the most dangerous of all) could be hidden there somewhere.

All Stalinist and communist regimes in Eastern Europe were a mixture of miserable everyday absurdism and periodic waves of terror which not only replicated but even surpassed the absurd, gloomy and dystopian literary universe described by Franz Kafka, as Milan Kundera masterfully describes it in The Art of the Novel.

I believe, however, that our Albanian Stalinist regime went far beyond the Kafkaesque. One of the difficulties that Albanian writers face today in describing Enver Hoxha’s regime (beside the deep trauma and humiliation caused by it) is that it defies human logic in the most cruel and ridiculous way.

At the same time and paradoxically, we were a rather lucky generation, and not only because we witnessed the collapse of the regime with all its bunkers and sealed borders.

Unlike our parents and grandparents, we grew up with radio and television in our households and therefore, we could, with our imagination, cross the sealed borders of our tiny homeland toward the world-beyond-the-border.

When, after the fall of the regime, we crossed the borders en masse – this time physically – it was also the result of years of border-crossing exercised individually and in secret within our minds and hearts.

Albanians carry a statue of former Albanian dictator Enver Hoxha during a rally to mark International Labour Day, in the center of Tirana (2007). Photo: EPA/ARMANDO BABANI
In one of his wonderful essays – written in English as a Soviet émigré in the US – titled Spoils of War, Joseph Brodsky describes how a Philips radio that belonged to German soldiers and brought home by his soldier-father as a spoil of war played an extraordinary role in healing the wounds of the deadly war and feeding his imagination against the isolation and terror of the Stalinist regime after WWII.

“Through six symmetrical holes in its back, in the subdued glow and flicker of the radio tubes, in the maze of contacts, resistors, and cathodes, as incomprehensible as the languages they were generating, I thought I saw Europe,” Brodsky wrote.

I felt goose bumps when I read the essay for the first time (actually, I read it when I became again a migrant in the US). It hit home with me because “I thought I saw Europe” for the first time exactly in the same way as Brodsky. My own radio was not German, it was Chinese. It also looked somehow like a spoil of war after the break up with the Chinese – many people in my generation imagined Europe and the West through their Chinese radios.

“And when at the age of thirty-two I indeed landed in Vienna, I immediately felt that, to a certain extent, I knew that place. To say the least, falling asleep my first nights in Vienna felt distinctly like being switched off by some invisible hand far away, in Russia,” Brodsky wrote.

If you replace Russia with Albania and you add to Vienna also Rome, Paris, London or Hamburg, that paragraph would describe the experience and feelings of many Albanians of my age when they landed – many of them as undesirable refugees – in those and other European cities. They had already and in secret “visited” Vienna, Rome, Paris, London or Hamburg in their imaginations thanks to the (Chinese) radios and televisions that became part of the Albanian household in the 1980s.

If Albanians had politicians of another quality and perception – and not the post-communist kleptocratic clowns who have ruled Albania these last 30 years – I imagine that a monument would have been erected in Albania to honour those tens of thousands of Chinese radios which fed the imagination of Albanians and kept alive their contact with the rest of Europe. (But Tirana is the only capital in Eastern Europe (along with Minsk) which does not yet have a monument dedicated to the victims of communism, so my suggestion might sound at least whimsical).

And if the EU did not have such a short-sighted foreign policy, it would have not thought twice whether to start accession talks with Albania. I believe there is no other nation in 20th Century Europe that craved, loved, longed and imagined Europe more intensely than the Albanians.

But the criteria in Brussels are different from those based in history and culture (frankly, I don’t quite understand anymore what their criteria are).

Why am I writing all this? Because I simply lost my way. I started writing this essay because a few weeks ago I decided to walk the same route I took when I crossed the borders with Greece thirty years ago. I’ll talk about that next time.