The teachers' protest, an indication of a Prime Minister with no idea about Education and Excellence 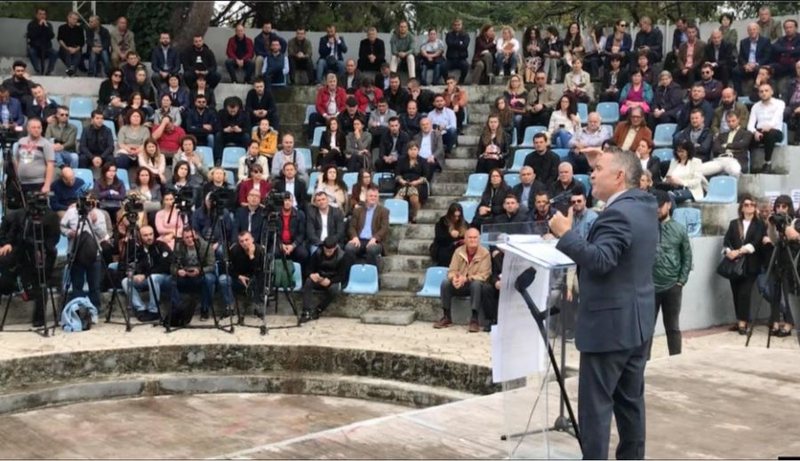 The battle for knowledge is one of the most difficult in politics. Like the motions of a large ship sailing in turbulent seas, the fruits of reforms in the education system come slowly.

Disinterested in a battle where there are more blows to be taken than political capital to be gained, politicians let the ship sink deeper and deeper into the storm that losing this battle produces. About viciously weird, but sadly possessive.

However, this reality is not a fatality. The teachers' protest of the last few days shows us that there is still hope. Their struggle for dignity, profession, primary conditions, and a better quality of life is our struggle and, as such, it must be supported unconditionally.

Albanians, wherever they are, must understand that teachers are the link between the past and the future of a nation. They transmit knowledge, convey memory, prepare generations and constitute a model that should be an example to be followed, not violated. The success of their work defines the boundary between a fragile nation and a strong nation.

Unfortunately, our nation today is fragile. The teachers are there to teach a generation that dreams of leaving Albania. An equation to solve. While we see it as a disaster, the government sees it as an opportunity. A fragile nation is a nation easily manipulated by the propaganda of an autocratic regime.

The first and irreplaceable step for changing this reality is the struggle of pedagogues for dignity. Edi Rama, more than anyone, has understood such a thing. He has brought out the usual weapons with which he has fought any attempt at resistance to his regime.

Through underestimation, Rama is creating a negative image of teachers. He is threatening the lecturers by various means - up to the (political) use of vetting to break their will. It incites a reaction to the "politicization" of the cause, promoting even its "non-politicization", which in fact, as deeply political, necessarily requires a political solution. Rama does this to prevent the union of the protesting forces in the country, which are many because the problems are many. He uses the confusion by stoking another fire with statements about excellent students - who, according to the pressure exerted, will receive scholarships only if they stay in Albania and, therefore, their diplomas will be held hostage for three years. This is an example of an authoritarian system,

This clearly shows that Edi Rama has no idea and no compass for higher education. So, he has not reached excellence yet, because firstly, he does not believe in excellent Albanians, and, secondly, he does not even know any such. Rama and his Rilindsha network do not like the excellent. For them, excellence is a danger. For them, every person, whether excellent or not, is just another number, a voter. Rama only makes noise. However, this noise should not overlook some simple truths:

The salary of Albanian teachers is the lowest in the region, in absolute and relative terms. This creates a huge gap between what is required of teachers, and what is given to them. The conditions in which teachers practice their profession are almost primitive. Tirana is not the whole of Albania. Scientific research is almost extinct. And if there is, it is done on a meritocratic basis, not a meritocracy. Nepotism in the academic field has killed the true values ​​of teaching. Pedagogical models have collapsed and the teacher-student relationship is in serious danger.

The contempt that Edi Rama shows towards teachers directly affects the denigration of their social status, so this profession is increasingly being abandoned by the younger generations.

The state is responsible for the well-being of society and, as a consequence, must ensure the preservation of the dignity of all Albanians, guarantee and promote it. The state can never desecrate our dignity, or threaten people who protest for their rights.

The country is not built by creating coercive, ruling, or fear-inducing mechanisms in people's psychology. The country is built by inspiring, creating hope and desire for youth to engage; improving the living conditions of all Albanians and those who have a key role in the development of society, such as teachers.

For these reasons, the Department of 'Brain Gain and Excellence', at the Democratic Party of Albania, strongly and unconditionally supports the teachers' protest.

*Andi Mustafaj is Head of the BrainGain and Excellence Department (for the international network) in the Democratic Party. The article is co-authored with the members of this Department: Daniel Nikolla, Haris Vongli, Henri Sharofi, Mariela Shkurta, and Ted Kopliku.