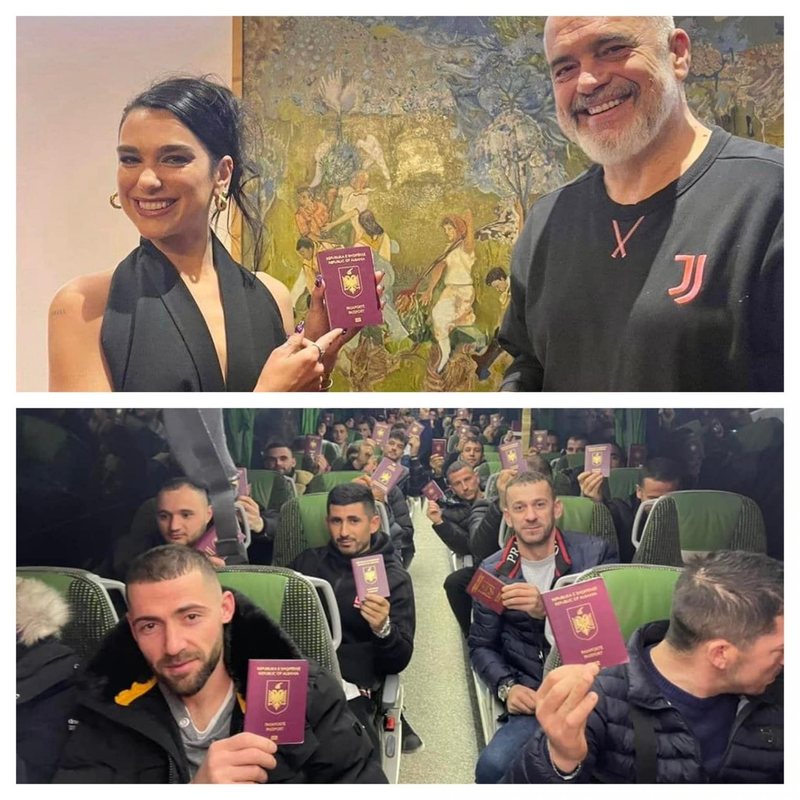 There were commentators from Kosovo who said that Dua Lipa is getting the passport of Albania with an accelerated procedure, while they have to wait for years or pay cash for that passport.

There were commentators from Albania who pointed out that that passport has often ended up in the canals, once deep in the Otranto channel and today deep in the English Channel, as the sons and daughters of ordinary Albanians continue their exile at an unstoppable pace.

Has the spectacle captured the nation and have we become a nation of the spectacle? Is the spectacle being presented to us both as "the whole society" and as "part of society" and as "what unites us"? If the spectacle is left to unite us, it is known since Debord that the spectacle unites only in isolation, only the isolated. The performance is like Cohen Leonard's verse, "let's be alone together". Has our only commonality remained loneliness and isolation while everything else including the nation-state has been privatized, sold and bought, spectacularized and over-symbolized? Is this one of the reasons to flee to those countries where society through the state does not abandon the citizen?

Those who are not in a hurry move to the "fast lane", those who are in a hurry must wait their turn. Whoever is rich constantly receives gifts that he does not really need, whoever is poor has to pay for everything. Even the rich often receive gifts from the poor, who thus wish to enter into communion with him - making him part of their economy. No one wants the poor to be part of their economy, because poverty, unlike success, is not treated with "sharing is beautiful". Is this one of the reasons for fleeing where it is easier to be poor but anonymous than here where you are poor in front of your sister and brother, whose indifference you have to endure also do you join parties where "we are one"?

On the one hand, it turns out that our passport is given with great pleasure only to those who are not interested in its functional aspect but only in its symbolic aspect. Those who expect some kind of operation from this tool, are asked for time until they get it. Is this a motive, a trace of our institutional development? Where does the institution work to be seen, in front of those who do not need it, and to solve problems in the invisible daily life of ordinary people? Does it matter that here you are counted, you are counted, except if you are "big" or "big"? And if you are medium or low, no one counts you, that is. you are not even important for statistics? Don't the Albanians run away from there because there at least they can be just a number, and have a weight however small, as respondents in surveys, as consumers,

One might have thought that through the symbolic gesture of the Albanian passport for the world-famous artist, Mrs. Lipën, an answer is given to the racist comment of a British politician, Mrs. Braverman. Even the emigrants who set out to cross the English Channel in cardboard boxes or refrigerated trucks dream of becoming successful like Dua Lipa. If not themselves, then at least their daughters or sons. And when they become successful, they return to their country and are welcomed by the prime minister. Get successful or die trying. The homeland will be rarefied, it will remain a festive home only for successful people who return from abroad, as the average and the weak are expropriated by foreign and local investors, and learn that in your country you have no value if you are not successful and that you can only become successful outside.

The 'McGonigal' scandal, the opposition organizes a national protest on February 11

Was he blackmailed as president by ex-FBI official? Meta clarifies: Rama has bribed the internationals to harm me

"No criticism of Rama", Berisha: Basha wrote 4 lines, he did not dare to mention it without permission with McGonigal

"I had warned", the expert: Hackers have attacked the data of "Air Albania", the company has until February 14

Who is the actor who will play Michael Jackson in the biopic?

"This mafia is also dangerous for the USA", Berisha: Rama engaged McGonigal to help Dako and Doshi

Saint Valentine for each horoscope sign according to Meri Shehu

Trump's reaction to the 'McGonigal' scandal, Bremmer: The answer is never pro-Putin

TI for VOA: Albania has stalled in the fight against corruption

Euronews: A spectacular bird sanctuary is threatened by the construction of an airport in Albania

What not to do when charging your phone

Vasili: McGonigal will also be investigated in Congress in the USA, Rama's ministers talk like fools!

A rare species of cat is discovered on Mount Everest

The 34-year-old woman in Elbasan had an abortion in the maternity hospital, and died a few hours later. Two doctors are involved

The US, unlike Germany, refuses to supply Ukraine with fighter jets

Eurovision 2023: The logo and significant slogan of the festival is published

Johnson goes to the US to ask for help for Ukraine

Europeans are the world's 'drunkest', but where does Albania rank?

Quarrel between the policemen in the former Block, they pull out their guns at each other. AMP starts the process

From the difficult childhood years in Albania to racism in Greece, Eleni Foureira tells

Journalist: How the boss of Agron Neza tried to blackmail me with 320 thousand euros

The closed-door meeting without Kurt for the association, Hovenier reacts

The chairman of the Democratic Party, Sali Berisha, has declared that Prime Minister Edi Rama must leave power at all costs, including civil disobedience in t...

DP MPs have requested to change the agenda of tomorrow's session in the Assembly. A group of MPs have filed the request in the assembly, through which they r...

The daughter of the famous writer, Ismail Kadare, Besjana Kadare has reacted strongly after the article published by Ben Blushi on social networks, in the for...