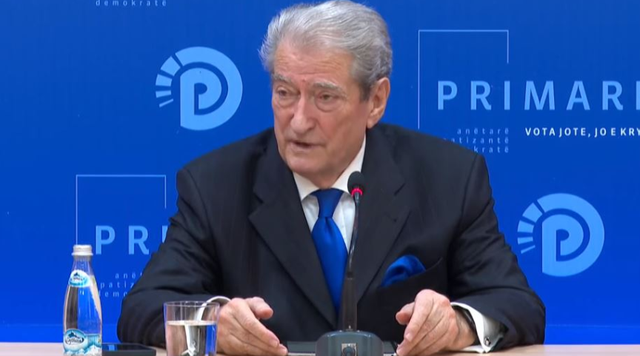 At the weekly media conference, the chief democrat Sali Berisha said that the protest of December 6 will express support for European values, while emphasizing that their violation has forced the Albanians to leave the country. He called on pupils, students and citizens to join the protest in Tirana.

"It is precisely the violation of these values, absolutely the most fundamental factor in the transformation of Albanians into boat-people for the second time in 30 years. In the raft people. I believe you saw yesterday's UK government statistics. Albanians far outnumbered Syrians and Afghans.

It is an opportunity to express your voice with dignity, with civility, before the leadership of the EU. It's Tuesday, it's a working day, 12 o'clock, but the sacrifice is worth it. I am confident that they will be present.

I invite school students to dedicate that day to their European future, I invite their students from all over the country to gather in Tirana. It is a unique, unrepeatable occasion for us to express our strong support for European values. They are so in danger in Albania" , said Berisha.

The latter said that the EU is coming to Tirana to put an end to the "Open Balkans". A day ago, the European Parliament expressed that it had strong reservations about this initiative and that it contradicted the principles of the EU, since the inclusiveness of the countries of the Western Balkans is missing.

The leader of the Democrats repeated the accusations against Prime Minister Edi Rama that he is playing the lawyer of little Russia. According to him, the EU will respond to Rama's vassalage to Belgrade.

"To give the divisive project in the Balkans, the leadership of Europe lands here with the banner of the Berlin Process. 6 countries of the Western Balkans are coming here, so in a way to bury the Serbian-Russian Open Balkans project, so much advertised by Vucic's vassal and indirectly by Putin.

Edi Rama has been attending every summit of Little Russia for months. Historically, Serbia has been evaluated and considered as a small Russia. But never in history, Serbia has proven more than today, that it is a small Russia in the Balkans, not respecting the sanctions imposed by the EU and NATO on Russia.

Thus becoming a dangerous backdrop for the Balkans of Putin's Russia. Edi Rama has made the advocacy of Little Russia open. He justified, asked others to understand why Serbia cannot respect the sanctions. De facto has respected Putin's policy towards Serbia.

Therefore, on this occasion, with the EU summit in Tirana, his vassalage to Belgrade, indirectly to Russia, receives a fatal response. The support he gives to Serbian hegemony and Russian influence in the Balkans", said Berisha.