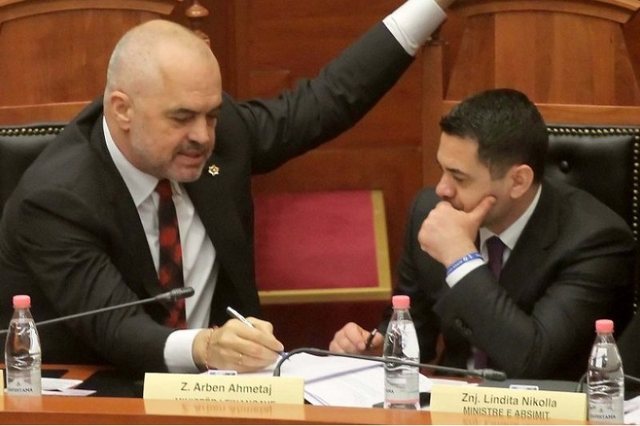 He has been described as the right-hand man of Prime Minister Edi Rama and the man of the three cabinets, but as of yesterday, Arben Ahmetaj will not lead any position in the SP, except that of deputy.

Yesterday, after the meeting of the Presidency, Rama announced that Ahmetj will no longer be the political leader of the Vlora district and appointed General Secretary Blendi Klosi in his place, and this seems to be the last 'slap' for his best man. near.

Asked where he went wrong, Prime Minister Edi Rama stated that the replacement of Arben Ahmetaj with Blendi Klos as head of the political district of Vlora was a decision that was taken to reorganize, according to him, the team that will work for the local elections.

At the end of July this year, Rama announced his dismissal as Deputy Prime Minister and as Minister of State for Reconstruction, replacing him with Belinda Balluk, changing the focus from 'reconstruction' to energy and infrastructure.

Also, another signal from Rama came in April of this year, which avoided Ahmetaj from the SP Congress. That day, all government ministers spoke, except for Ahmetaj, and this fact was not passed over in silence by the media. At that time it was commented that it could be related to the 'hot' issue of incinerators.

Rama was asked yesterday by the media whether with this move he is warning Ahmetaj's investigation about the incinerators.

"These are those fairy tales, you are within your right to tell fairy tales, coinciding with every decision and opening goals that do not exist", said Rama.

SPAK has opened some of the pies, where Klodian Zoto and Mirel Mërtiri, announced as wanted, are on stage.

Although after his dismissal as deputy prime minister it was rumored that he was involved in the incinerator affair, SPAK reacted publicly saying that the former deputy/prime minister was not registered in any criminal offense.

In the first term, he served as the Minister of Economic Development, Tourism, Trade and Entrepreneurship during the period September 2013- February 2016. From February 2016 to January 2019, Ahmetaj was entrusted with another very important post in the government, the keys to country's finances.

From December 2019 onwards, Arben Ahmetaj took on another responsibility heading the Ministry of State for Reconstruction, after a year at the head of the Parliamentary Committee on Economy and Finance. The work done in the reconstruction process made Prime Minister Edi Rama move to the right wing.

Ahmetaj was also the political leader of the Vlora district.