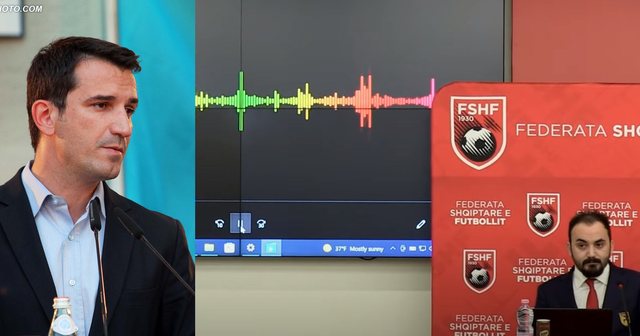 The Albanian Football Federation (AFF) has published an audio-tapping of the mayor of Tirana, Erjon Veliaj, where during a meeting with some members of the football community and the Tirana Regional Association, he used an inappropriate vocabulary.

It was the official of the AFF, Andi Verçani, who quoted some of Veliaj's statements where a serious dictionary was used, with insults and insults addressed to one of those present, the president of the Regional Football Association in Tirana, Sulejman Mema .

Verçani described as a rogue dictionary, the speech of the mayor of Tirana during the meeting, quoting some of the words he mentioned and with which he addressed the representatives.

"Before making the audio material available to you, I want to tell you that all the material has very serious phrases, that those who are live do not know how to hide it, because it is not my dictionary but the chairman of Municipality of Tirana. "The vocabulary of a rogue and a strong neighborhood", said Verçani.

"Not UEFA and FIFA coming down, but Jesus and Muhammad coming down can not stop my fight. I will do everything to darken their lives with the Prosecutor and the SPAK. Even if we want to withdraw, we can not withdraw, because the prosecution has been set in motion. Football is the only island that has remained unchecked. Yes well take Sul, who laughs with me. How can a slave wait for a cow and behave like a rooster? "We are men, we are not where *** a" , quotes Verçani.

"I am the mayor, I want to control football. My house. Football is one of the rooms of my house. You will support Eduard Prodan in the bloc ", says Veliaj during the conversation, among other things.

Recall that the day before, the Municipality of Tirana announced that it will request a national and international investigation into the leader of the AFF Armand Duka, for corruption and violations committed during his 20-year career in the AFF.