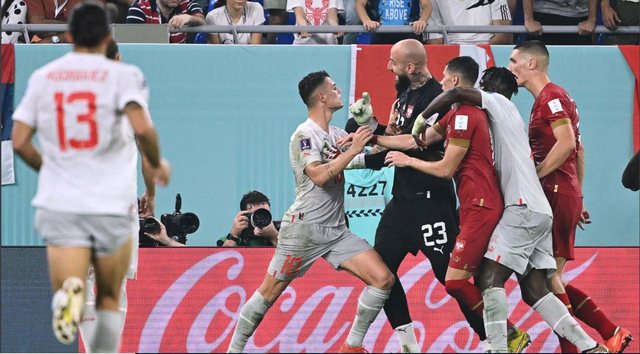 According to FFK, the display of slogans with political and racist messages against Albanians were heard almost throughout the match, which Switzerland won with a score of 3:2.

"FFK demands from FIFA an investigation of this case and sanctions against the Football Federation of Serbia, so that fascist calls once and for all stay away from football stadiums and away from events like the World Cup", says the announcement of FFK.

According to the FFK, such calls from fans of the teams participating in the World Cup, which is being held in Qatar, "cannot be understood and justified by anyone, especially now when Europe is threatened by the fragile security situation as a result of the aggression Russia's unprovoked attacks on Ukraine".

"Teams and fans with behavior and philosophy of hatred of man for man should not have a place in such an important sports event as the World Cup 'Qatar 2022'," said the FFK on December 4.

Players of Albanian origin play in the Swiss national team, including Granit Xhaka and Xherdan Shaqiri from Kosovo, and Ardon Jashari from North Macedonia. The match between Switzerland and Serbia was characterized by tensions, between Switzerland's captain Xhaka, and the players of Serbia who were on the field, but also those who were on the bench.

Switzerland managed to eliminate Serbia from the World Cup, thus passing the group stage, and will now face Portugal on December 6 in the round of direct eliminations. Otherwise, in November, FFK submitted a complaint to FIFA for the display of a flag in the dressing room of the representative of Serbia, with the map of Kosovo in the colors of the Serbian flag and with the inscription "No surrender".

Following this complaint, FIFA said it has initiated disciplinary measures against the Serbian Football Federation. FIFA cited a section of its disciplinary code that covers misconduct, including "offensive gestures, signs or language" and "using a sporting event for demonstrations of an unsporting nature".

The number of victims after the tragic earthquake in Turkey has increased to 3,381. According to the Disaster and Emergency Management Authority, anothe...

The mayor of Tirana, Erion Veliaj, decided to shorten "Ibrahim Rugova" street in Tirana. The axis, which until two days ago bore the name of the former ...