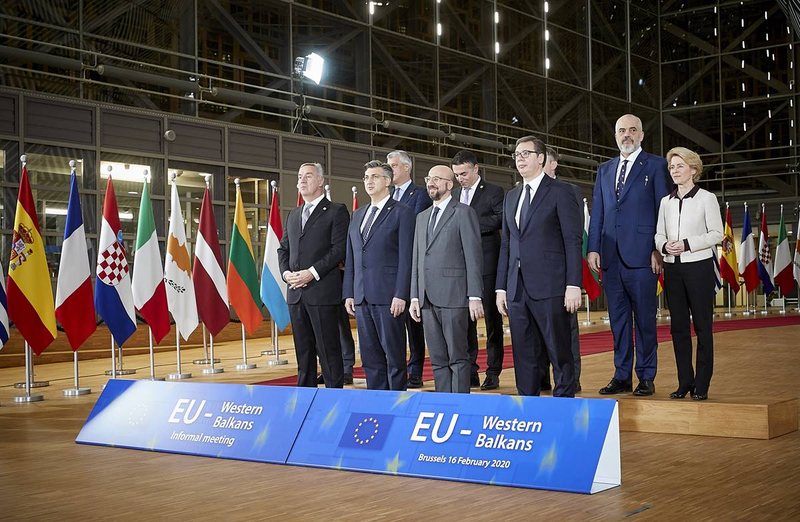 The European Union organizes on Tuesday in Tirana the summit between the Union and the countries of the Western Balkans with an agenda dedicated to expansion and facing the consequences of Russian aggression against Ukraine.

This is the first summit to take place in the Western Balkans region, and according to the European Council, "it is an opportunity to reaffirm the key importance of the strategic partnership between the EU and the Western Balkans, a region with a clear EU perspective" .

The agenda published on Monday has defined as the main topic of discussion the joint confrontation with the consequences of Russian aggression against Ukraine, where European leaders will specifically discuss how to deal with its negative effects in the field of energy and food security in the Western Balkans.

In this context, the Summit will be an opportunity to discuss coordinated actions on security and defense issues, which have become even more important in the context of Russian aggression against Ukraine.

At the joint table, we will talk about engagement in cooperation policies with a special focus on young people; strengthening security and building resilience against foreign interference and addressing the challenges of migration, the fight against terrorism and organized crime.

During the 1-day work, there will also be an assessment of the progress made towards the integration of the Western Balkans with the EU market, the modernization of the digital payment system according to European standards and the implementation of the green line to facilitate the movement of goods and services. .

The leaders of the EU member states are expected to come out with a statement at the end of the summit, while integration experts see this summit of special importance for the region and a return of Brussels' attention to the Balkan countries that have been waiting for decades in integration path to join the EU.

Afrim Krasniqi, executive director of the Institute for Political Studies, thinks that the region may see the summit as a more inflammatory EU approach towards it.

"From the preliminary data of the EU, no important agreement is expected, but after the July decision to open negotiations with Albania and North Macedonia, this is the most serious step and the most important act," he told BIRN. .

The choice of Tirana as a destination, according to Krasniqi, is doubly positive news, for Albania and for the region. But, according to him, Albania should use this moment to convey the image of the country with stability and western orientation.

"Especially to overcome the conflict without political sense, to follow a concrete agenda of reforms towards integration, agenda and results which are currently missing" - he added.

In this context, he adds that, Serbia's warning about the boycott of the summit shows the increased pressure on Belgrade for the choice it will make for the future; whether it will be with the EU or not.

Even Krasniqi sees the summit on December 6 as an opportunity to clarify the position of the Balkan countries in relation to the influences from third actors.

According to him, the EU has rightly been criticized for lack of strategy and confusion in the messages for these countries, but the crisis in Ukraine has brought attention back to the importance of the region in the security system.

"The EU sees Russia as a threat to the region, Albania too, but some countries have a different opinion, so the summit confirms the official line of Brussels and is a clear response to the dualist policy of Belgrade and the local crises in Sarajevo, Pristina and Podgorica" ​​- concludes he.

The 'McGonigal' scandal, the opposition organizes a national protest on February 11

Was he blackmailed as president by ex-FBI official? Meta clarifies: Rama has bribed the internationals to harm me

"No criticism of Rama", Berisha: Basha wrote 4 lines, he did not dare to mention it without permission with McGonigal

"I had warned", the expert: Hackers have attacked the data of "Air Albania", the company has until February 14

Who is the actor who will play Michael Jackson in the biopic?

"This mafia is also dangerous for the USA", Berisha: Rama engaged McGonigal to help Dako and Doshi

Saint Valentine for each horoscope sign according to Meri Shehu

Trump's reaction to the 'McGonigal' scandal, Bremmer: The answer is never pro-Putin

TI for VOA: Albania has stalled in the fight against corruption

Euronews: A spectacular bird sanctuary is threatened by the construction of an airport in Albania

What not to do when charging your phone

Vasili: McGonigal will also be investigated in Congress in the USA, Rama's ministers talk like fools!

A rare species of cat is discovered on Mount Everest

The 34-year-old woman in Elbasan had an abortion in the maternity hospital, and died a few hours later. Two doctors are involved

The US, unlike Germany, refuses to supply Ukraine with fighter jets

Eurovision 2023: The logo and significant slogan of the festival is published

Johnson goes to the US to ask for help for Ukraine

Europeans are the world's 'drunkest', but where does Albania rank?

Quarrel between the policemen in the former Block, they pull out their guns at each other. AMP starts the process

From the difficult childhood years in Albania to racism in Greece, Eleni Foureira tells

Journalist: How the boss of Agron Neza tried to blackmail me with 320 thousand euros

The closed-door meeting without Kurt for the association, Hovenier reacts

The chairman of the Democratic Party, Sali Berisha, has declared that Prime Minister Edi Rama must leave power at all costs, including civil disobedience in t...

DP MPs have requested to change the agenda of tomorrow's session in the Assembly. A group of MPs have filed the request in the assembly, through which they r...

The daughter of the famous writer, Ismail Kadare, Besjana Kadare has reacted strongly after the article published by Ben Blushi on social networks, in the for...