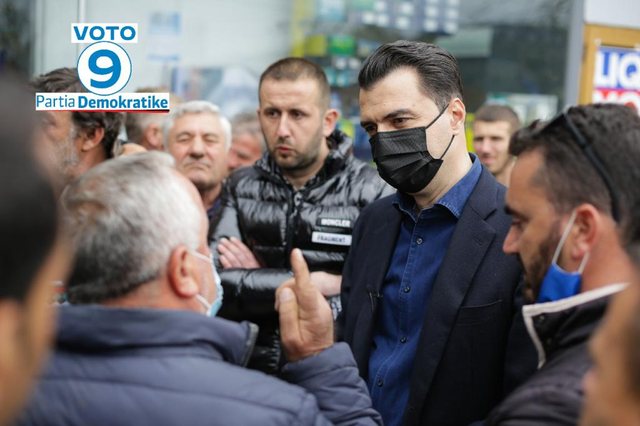 The chairman of the Democratic Party, Lulzim Basha, held a meeting with the residents of Vaqarr, who raised the concern that the administrator of the Vaqarr administrative unit, Gent Myrto, is stealing the properties of the residents.

A citizen: Here in 2014 it was completely walled here. This area has eaten about 500 million old fines from INUK. We have overcharges of around 10-15 million for electricity houses. There is no fine here that has not been imposed. This is the most persecuted place of all areas. That we have people and we Sauk, we have in Selit, everywhere, as in Vaqarr, Peza, Ndroq is a disaster. We have problems getting properties. My uncle's son's shop was demolished there. In vain, we will pave the way to demolish the shop without papers at all.

Lulzim Basha: Who is here, a Gent Myrto or not?

Basha said that the reason why the leaders of the administration are property thieves, is because justice is under political pressure. The leader of the Democrats said that April 25 is the day when with the vote at number 9, justice will be freed from political pressure and all those who have unjustly violated the rights of citizens, will face the law. The opposition leader vowed that by restoring local autonomy to the people and the new administration will be entirely at the service of the citizens.

"Now, Gent Myrto you know very well is a certified land grabber. The only reason he is here and not where he belongs is because justice is under political pressure. April 25 is the day when with vote number 9 you will liberate justice from political pressure and a justice liberated from political pressure, Gent Myrton with friends, who is one of the biggest land robbers in Albania, Vaqarr lands in in this case, but as such there are many examples, there will be no escape from justice.

Of course justice will do justice, not the government. We will keep our hands off the justice system. But the only reason why these things have happened here is because the government, with political pressure on prosecutors and judges, has protected corrupt officials who rob them of their property, rob them of their taxes and then divide them with a handful of rulers in Tirana. When we talk about change, a very important part of change will be this. On April 25, by voting for the Democratic Party, for the Alliance for Change, by voting for the number 9, you will give us the opportunity to free the hands of justice.

Land grabbers like the one you have here and as they are all over Albania and you can be sure that on April 25 this drama will end. The only thing that needs to be massively on April 25 massively in the ballot boxes no resident to stay at home because you have the responsibility. You are responsible for the vote. It is in your hand, you have that power.

Use that power, this is what I am asking for, this is what our partners are asking for. Use that power, take that responsibility. I invite you to vote for the change, to vote for the number 9 and I guarantee you that one of its effects will be and we will have a functional justice, without political pressure which from the first state official, from the next Prime Minister "From me to the last official, if we violate the law we will answer before justice" - said Basha.