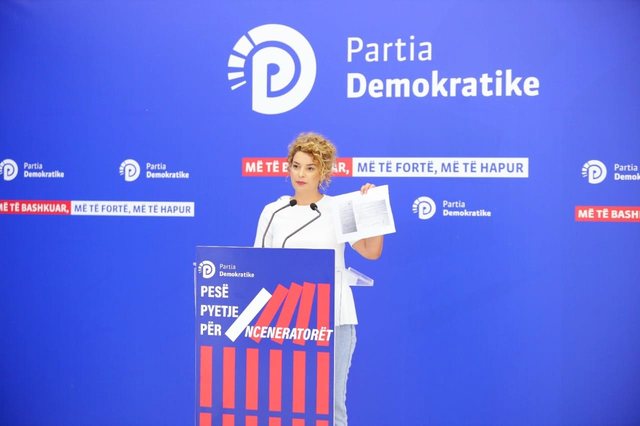 The Democratic Party continued with the questions raised on the 430 million euro incinerator affair.

The Coordinator for Media and Communication, Silvi Bardhi, said in a statement from the blue headquarters that the Ministry of Environment at that time used the budget of the Emergency Fund to transfer 15 million euros to the Fier incinerator, without VKM.

Bardhi clarified that the signed contract was not even published in the Official Gazette. Bardhi stated that the 30 million euro contract that was concluded with the Ministry of Environment, 15 million euro was allocated for the construction of the incinerator, and the rest went into the pockets of the governors.

With only one photo, today we will show some scandalous aspects of the Fier Incinerator affair.

As you may know, the contract for the Fieri Incinerator was signed by the Minister of Environment, although there was no money in the budget and the Prime Minister's Emergency Fund was used.

It was not signed by the Prime Minister who gave the money, nor by the Municipality that would receive the service.

As you may be aware, this contract has not passed with VKM and has not been published in the Official Gazette.

Why this thing? Many would be surprised.

Because the contract has other details that we will see in the coming weeks.

Today we will deal only with one page of the insurance contract.

The "nones of the incinerators" received a 30 million euro contract with the Ministry of Environment on October 24, 2016, and only 2 weeks later, on November 10, 2016, they found an Italian to build it turnkey for 15 million, thereby washing the entire 15 million euros of public money.

He did not invest anything, not a shovel, but they received 15 million euros of public money.

They signed an insurance contract with a bank leaving no collateral, no investment, only the contract with the Ministry of Environment and public land!

This would not be possible without Edi Rama!

1. Those who had no investment, were the experienced company that should have been given 30 million euros of public money?

2. Why was the local government autonomy law violated?

3. If an incinerator was needed in Fier, why didn't the Municipality make the tender and save 15 million euros?

4. Why was the location of the Fier Incinerator changed 3 times and even another location was chosen from the 10 proposed by the Commission set up by the Fier Municipality?

5. Who robbed them, or rather, between whom were 15 million euros of public money divided?

We say that they were divided between Rama - Ahmetaj - Agaçi and their realtors Zoto, Mërtiri, etc.

Who else could it be?

Dear Albanians, what do you think?