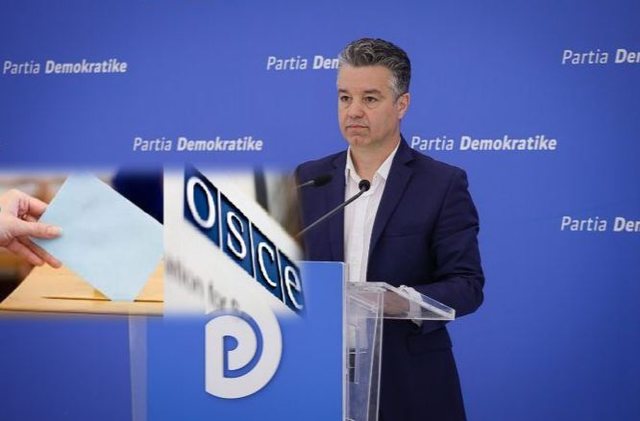 Former Democratic Party coordinator Eno Bozdo reacted to the OSCE / ODHIR report on the April 25 elections, commenting on the stance of political parties and the public in the face of these findings.

Citing the Latin expression "Verba volant, scripta manent", the words are blown away, but the writings remain, he says that this does not correspond to the Albanian reality.

According to Bozdos, what is stated in the OSCE / ODHIR report would be enough for the citizens themselves to demand the resignation of the government and the re-run of the elections. But for this to happen in Albania, according to Bozdos, is to dream with open eyes.

He states that the report confirmed the manipulation and alienation of the vote, the misuse of the administration, political pressure, etc. Bozdo adds that society is rightly tired of reading and reacting to the report.

"Of course we as the opposition have every right to shout as much as we can about this. But society, not without reason, feels very tired to read and react. It does not even take the trouble to actually enter this debate, even "What the report mentions is widely known and publicly debated ," he wrote on social media.

Regarding the "translation" of the report, Bozdo says that the opinion is divided into three parties, two are the positions of the opposition and the government and the third party is the one that thinks that all parties are the same.

"Here is how even a written report dissolves in the air with the heat, without the slightest critical debate from the public. Politics shouts, but society does not react. There is no need to react in fact, because when it shouts, "Politics will not even know. This is what has happened and this will probably happen for many more years in Albania ", adds Bozdo.

Describing this whole situation as absurd, he says that the only winner is Prime Minister Edi Rama. Bozdo adds that if the DP does not change the way it reacts, this situation will be repeated.

"This tired society requires a strong shake-up and the PD is the only one that can achieve this. And for this the contribution of every democrat is required, because no one can be superfluous. The return of the PD to the origins of the '90s, to the party "It should be the biggest objective of the opposition today. For this, political action is needed, because in Albania, even the written word is blown away ..." , Bozdo concludes his reaction.