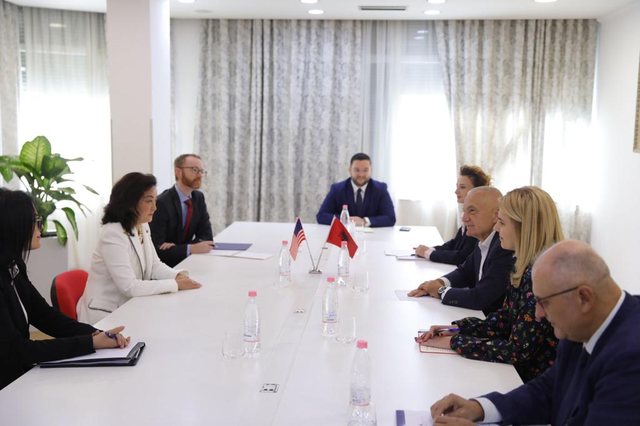 The chairman of the Freedom Party, Ilir Meta, and the chief democrat Sali Berisha have a close cooperation and have expressed themselves on the same line for the opposition's action against the government.

In the conference held today, Meta was asked if the US ambassador, Yuri Kim, had given him any message or reservations about his cooperation with Berisha, in the meeting that took place two days ago.

Meta said that if Kim will have a message, he will say it publicly, but he indicated that he had spoken with the ambassador about declaring Berisha "non grata". He stated that he told the ambassador that the US decision on Berisha had a positive effect, because it caused Lulzim Basha to leave the leadership of the DP.

Meta emphasized in his speech to the journalists that the Freedom Party has its own program that is not influenced by that of the DP and that it does not choose between America and Berisha. He also underlined that he informed Kim that Basha had billed Berisha for all his wrong political decisions.

"We had a very open, constructive, very cooperative conversation. I cannot tell them what the ambassador's messages were because they speak for themselves when they have something to say.

But I can tell you what I said to the ambassador so that you can be calm, that what I say in closed meetings I also say in open meetings.

I said once again my opinion on the issue of declaring Mr. Berisha 'non grata'. I expressed my conviction that it is primarily the work of Basha and Rama in cooperation.

But at the same time, I seriously told him to say in Washington that at least I appreciate the positive effect of this decision, for which I was neither nor do I agree that I call it non-proportional, that without such a decision we would still have the president of the DP Lulzim Bashan.

We do not choose between Sali Berisha and America, between DP and America, we have our own program as the Freedom Party which is 100% independent from DP, we respect the decisions made by the members, sympathizers do not interfere in their election processes and we we stand by our program to fulfill our obligations to the strategic partnership with the US and to accelerate at a dizzying pace the priority reforms in the field of the rule of law, organized crime and corruption that are key to EU membership. We have no reason to make such a choice, we are convinced that DP is a party committed to adhering to the strategic partnership with the USA" , said Meta.