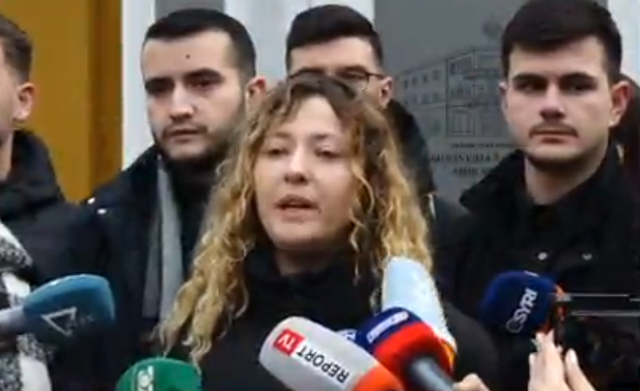 A group of students came out this morning in front of the Ministry of Education, where they held a symbolic protest for the branches that are in danger of being closed in public universities.

According to them, 71.6% of the branches are at risk of being closed because they do not even meet the minimum number of 10 students. One of the factors that young people identified for the emptying of universities was mass emigration. They said that public universities are losing about 3,000 students every year.

They further added that the only quotas that are filled are for the medical branches, as young people see them as an opportunity to flee the country.

The students said that this panorama clearly shows the systematic failure of the policies undertaken by the ministry, while adding that young people are not able to enter the labor market.

"During the last 4 years, an average of 8 students per day, or about 3,000 students per year, have left public universities, which are becoming more and more empty every day. The decline in the quality of public education has caused enrollments in them to decrease by 11.3%, this figure only in the last 3 years.

Through the political decisions that were systematically made without analysis, today there is no indication that these decisions have improved education, on the contrary, they have penalized young Albanians.

Today it seems that we have entered the path of no return, political decision-making continues without analysis and only to close the holes that politics itself opens on the educational system. I believe that you all remember the announcement and trumpeting of the Priority Study Programs. 35 Programs which have already been abandoned by students would offer them a monthly scholarship in the value of the minimum payment.

Based on the data of the UAlbania portal, which has the obligation to publish and make transparent the registrations in the country's universities, 71.6% of the priority programs risk being closed because they do not meet the minimum number of 10 students.

The irony of fate is that 4 of these 35 programs have been closed before the implementation of the scholarship program has started. This panorama clearly shows the systematic failure of the policies undertaken by MAS and is a signal that young people do not prefer these programs as they do not find themselves in the Albanian labor market and do not trust these policies.

Meanwhile, students continue to be oriented towards study programs that serve as a "passport" to emigrate. In the nursing study program, 92% of the quotas have been exhausted" , said the students.