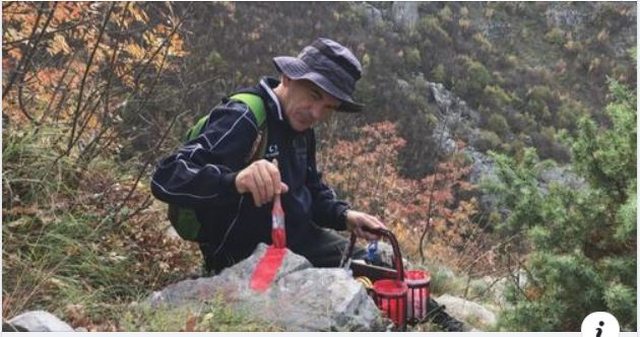 I forwarded a dear friend today. Ndoc Mulajn, a 53-year-old from Mulaj e Mërturit, a Catholic of the tribes of our Northern Mountains, unfamiliar with the peaks, necks, crossings, paths, springs, rivers, and caves, which he insisted were beer … because that is what they call them on his sides.

Ndoci was something on its own for many people, but I want to talk about what it's like for me. He was, therefore, the man who, in addition to loving the mountains, understood them, heard them whisper special codes or silences, which only highlanders could grasp. Ndoci was a philosopher of the mountains, not an excursion, their ordinary trespasser. How can you understand otherwise a mountaineer, who has been born at the top of the majestic and at the same time rugged mountains of its sides, who returns to them with perseverance in adulthood? Not only with the passion of recognizing them, but also with the desire to open them to the eyes, hearts, and minds of others.

Anyone who goes to the mountains knows that most of their trails have been marked by Ndoc Mulaj. From the Meadow of Hamza in Tërbun, from the Open Meadows in Cukal, from Bicaj to Krrab, from the Shala River to Guri i Blinit of Lekë, and further to Theth, along the Shala River, or above in Mollë i Shoshit, is Ndoc Mulaj with his hand and philosophy. If he gets in the way there, the paint of the white-red stripes on the stones, on beech or oak trunks, is from his hand. When you see signs of thinly marked mountain trails, with directions and kilometers, as in Shkodra, Malësi e Madhe, Puka, or Tropoja, it is like having Ndoc Mulaj and the soul coming out of his body on the afternoon of Thursday, December 30, t 'lead you to the heart of the mountains.

Ndoci was just like the highlanders, in stature and word. Within them, you can find, not infrequently, the subtle irony of a man who has seen life from the heights of the geography of his country and his personal history, which do not allow for excessive words and few acts. He even used this irony to cover up his sometimes ignorance. For example, when we were returning from climbing the mountain of Krrab and, after passing Puka, I asked him 'what is the name of that village there on the slope of the mountain, Ndoc'. 'I do not care at all,' he waited for me. It was his sarcastic way of saying 'I do not know'. And Ndoci did not allow himself not to know something about our mountains, tribes, waters, surprises, and their temptations.

Ndoci was the embodiment of subtle ironies even within his own life. He had heart problems and, after an intervention, doctors had implanted two coronary rings. He, with all the pride, the rings in his heart, and the love for the mountains, did not part with the ascents and descents from those heights which called to him.

Both in life and death.

With those rings in his heart, Ndoc Mulaj gave his body in the heart of our mountains, in Munella, somewhere between Mirdita and Puka. He gave body and gained spirit, as Dom Gjergj Meta could say, whom Ndoci had invited to do that climb in Munella together with us on that dramatic day of December 30th.

Ndoci's body fell and the ascent went up, just below the Top of the Cross on Mount Munella. When I saw the cross and the rosary today among the lifeless hands, when I remembered the conversations with it, with some doubt about religion, I could not miss a maxim from the Bible, where God addresses man: You who did not participate in creation your, how can you not ask me to be in your salvation.

Ndoci separated us physically but left us the mystique of his mountains, the presence of our mountains. As he wrote in a post on November 15 this year:

When I die, let me be grass,

in my mountains in the spring,

in autumn I will become a seed.

When I die, let me be water,

and my breath is steam,

it will rain in the field.

When I die, let me become a stone,

at the edge of my country,

Ndoc Mulaj returns to his mountains, which gave him life, but in a moment of surprise, they took it. He could have died in bed from the heart but chose to die where he had the heart.