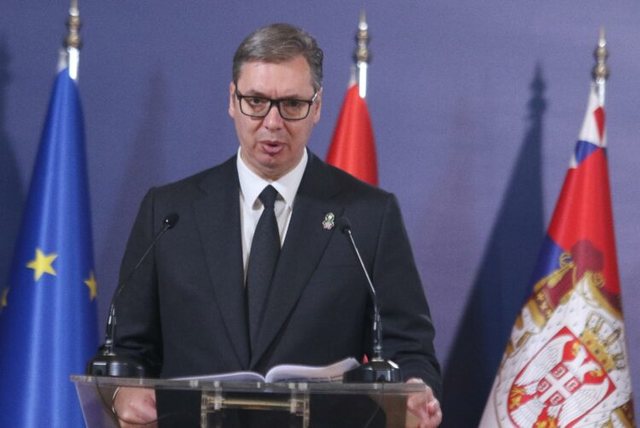 The European Union has again called on the political leaders in Kosovo and Serbia to refrain from inflammatory rhetoric and have "European behavior", to help reduce tensions.

The spokesperson of the European Union, Peter Stano, made these statements after the journalists' questions about the statements of the Serbian president, Aleksandar Vučić, who called the Prime Minister of Kosovo, Albin Kurti, "terrorist scum", and warned that Serbia will not to participate in the summit organized on December 6 in Tirana between the EU and the countries of the Western Balkans, which are not part of the European bloc.

The spokesperson of the European Commission, Eric Mamer, has said that the Tirana Summit has a special importance, especially in the context of the global situation, and the EU expects all leaders to participate in it.

Stano said that it is important to consider the situation and keep it calm.

"The security situation on the ground is fragile and work must be done to return the Serbs to the institutions of Kosovo. The Tirana summit is of particular importance, given the geopolitical circumstances," he said.

Vucic's statements about Kurti were made after the decision of the Government of Kosovo to appoint Nenad Rashic to the position of Minister for Communities and Returns.

Serbia has considered this decision as a violation and has said that Rasić does not represent the Serbs of Kosovo.

"We, as a community of 27 countries, expect all partners to behave in a European manner, and this includes both Serbia and Kosovo. This means restraint from inciting statements", said Stano.

Referring to Rashiqi's appointment, Stano said that "according to preliminary assessments, his appointment was not in accordance with the constitution".

The position to which Rashić was appointed was held by Goran Rakić until the beginning of November, who resigned due to the decision of the Government of Kosovo to re-register illegal Serbian license plates in the north of Kosovo./ REL