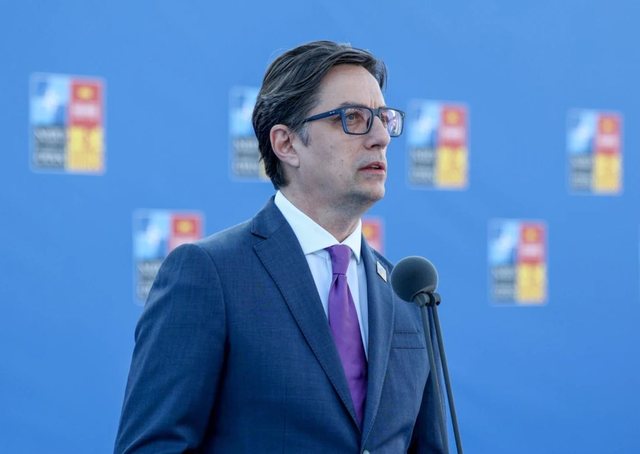 The President of North Macedonia, Stevo Pendarovski, has declared on Sunday that the new French proposal for the settlement of the dispute with Bulgaria is acceptable because, according to him, it is a "transitional compromise" to start membership talks with the European Union.

After the meeting of the National Security Council, in which the main institutions of the state participate, President Pendarovski said that the government should also approve a conclusion or annex to the modified proposal that it will reject the talks if during this process the Bulgarian side insists to negotiate the Macedonian language and identity.

"We should not wait for someone to block us, but we should immediately withdraw from the talks. I say this because we know who we are dealing with", President Pendarovski stated.

The head of state said that he believes that the modified French proposal does not endanger the issues related to the Macedonian identity and that it cannot be a question of the Bulgarianization of the Macedonians, as claimed by the opposition and other political and academic personalities in North Macedonia.

"The fear of some Macedonians that we will enter the EU only as Bulgarians, does not hold. How can a Macedonian become a Bulgarian?... In the history of world diplomacy there is no such thing, that with a bilateral or multilateral agreement, someone overnight changes your identity", stated Pendarovski.

He added that the decision to accept the modified French proposal, "is neither a historical triumph nor a failure and failure".

"I consider that it is a matter of a temporary compromise for one of the phases of European integration, which has three important elements and for me at this stage it is acceptable", said Pendarovski.

The Minister of Foreign Affairs of North Macedonia, Bujar Osmani

Meanwhile, regarding the French proposal, Prime Minister Dimitar Kovacevski on Sunday also met the leader of the Macedonian opposition, Hristijan Mickoski, as part of consultations with political parties and other factors in the country.

Prime Minister Kovačevski has assessed that the modified French proposal "does not endanger either the Macedonian language or identity and is the only possibility for unblocking the European integration process", while the chairman of VMRO DPMNE remains in the position that "the new proposal does not differs from the first in its content, which is harmful to Macedonian national and state interests". /REL/