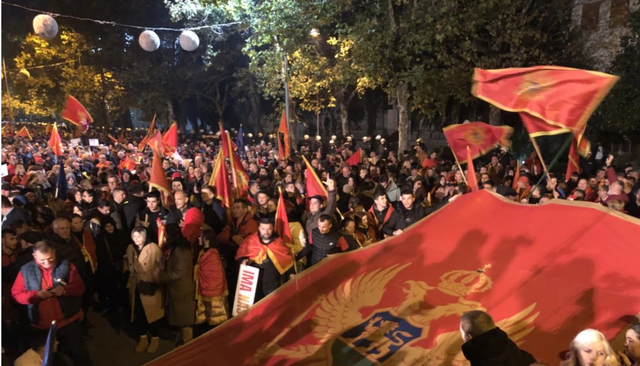 For the third time during this month, a protest was held in front of the Parliament of Montenegro with the slogan "We exist", attended by thousands of citizens who want the amendments to the Law on the President, the unblocking of the Constitutional Court and the holding of elections parliamentary term.

At the protest held on November 28, protesters sang the Montenegrin national anthem, carried flags of the United States and the European Union, and held placards with messages such as "For Montenegro, for the EU," "Nationalism is rampant and that's where the Constitution falls", "We will not prepare the suitcases" and the like.

After the speeches to the protesters, the citizens marched through Podgorica, and the rally ended without incident.

At the protest, chants were heard against Abazović and the president of Serbia, Aleksandar Vučić.

Nermin Abdiq, a member of the Democratic Socialist Party of president Millo Djukanovic, said that citizens must protect the state.

"We must maintain multi-ethnic harmony. We are in such numbers tonight because we are not divided on the basis of religion, ethnicity, language or skin color... We gathered because of love for the country. We must not allow patients to be treated without medicine, for our children to go to schools that do not have heating... We will not forgive them... Montenegro will not be an asylum seeker within Montenegro. Let's unite to save our only home", Abdiq said.

The protests in Montenegro are being held because of the political crisis, after the overthrow of the Abazovic Government in August of this year.

The opposition, led by Djukanović's party, wants the dissolution of Parliament and the organization of extraordinary elections, but the parliamentary majority, led by the pro-Russian Democratic Front, is demanding the formation of a new government led by Miodrad Llekić. which has the support of this party.

After Djukanović refused to mandate Llekić for formal reasons, the parliamentary majority tried to change the laws in order to transfer the constitutional powers of the president to the Parliament, so that Llekić could be mandated by the legislative body. The protesters have demanded that the amendments with these changes be withdrawn from the Law on the President.

However, Montenegro also has blocked the Constitutional Court, since since September it does not have the necessary quorum to make decisions. Without the quorum of this institution, the final results cannot be announced in case of elections./ REL