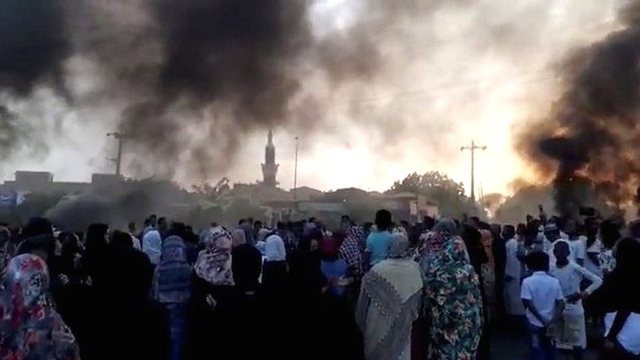 Several members of Sudan's interim government have been arrested in their apartments following reports of a military coup. Civilian Prime Minister Abdullah Hamdok and at least four ministers were among those believed to have been arrested by unidentified soldiers shortly before dawn Monday.

The military has not commented, but pro-democracy groups have staged street protests. Military and civilian leaders have been at loggerheads since long-time ruler Omar al-Bashir was ousted two years ago and an interim government formed.

The BBC writes that it remains unclear who is behind the arrests. A statement from the information ministry on Facebook said the detentions were carried out by "joint military forces" and the detainees were being held in "an unidentified location".

Witnesses said the internet was cut off in the capital, Khartoum, as footage appeared on social media showing angry crowds burning tires on the streets.

The army is deployed throughout the city, restricting the movement of civilians. Khartoum Airport is now closed and international flights have been suspended.

Sudan's main pro-democracy group has called on its supporters to resist any military coup. Military and civilian authorities have ruled together since President Bashir was ousted after months of street protests in 2019.

An agreement on the division of power between the army and a free group of groups - the Forces for Freedom and Change (FFC) - was agreed, creating the Sovereign Council. He was to rule the country for another year - with the aim of holding elections and passing to civilian rule.

But the deal has always been divisive, with large numbers of rival political groups - and divisions within the military as well. Tensions escalated further after a coup attempt attributed to Bashir's followers failed in September.

This month, opponents of Sudan's transition to democracy took to the streets of the capital, Khartoum, to call on the military to take control of the country. Pro-democracy groups said it was an attempt by the military to regain power.

Last Thursday, tens of thousands of people demonstrated in Khartoum to show solidarity with the transitional government. Support for the interim government has plummeted in recent months as the country's economy has struggled.

Sudan has not been able to find a functioning political system since independence in 1956 and has seen numerous coups and coup attempts.