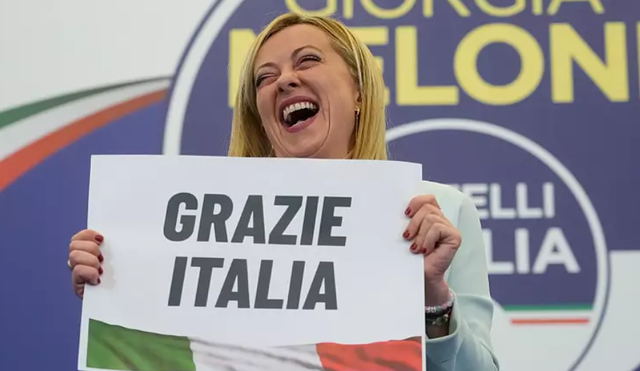 Here are the highlights from Italy's snap general election, which returned the far-right to power, while the new government will be led by Giorgia Meloni.

As head of the largest party (Brothers of Italy) in the winning right-wing coalition, Giorgia Meloni is poised to become Italy's first female prime minister.

In a highly patriarchal country whose leading political figures have been predominantly male, Meloni's victory represents a major break with the past.

In an interview before the elections, she stated that "it would be an honor for me to be the first to break this taboo in my country".

She may have received some form of support from former US Secretary of State Hillary Clinton, who said the solution to women in office represented a "step forward".

2. Italy will have its most right-wing government since World War II

For much of the postwar period, Italy was dominated by the now-defunct Christian Democracy, a large, conservative, pro-American party that combined more right-wing and left-wing factions.

After the Bribesville scandal of the early 1990s, Italy's party landscape changed radically, and Berlusconi emerged as a senior political figure presiding over many right-wing governments.

3. Participation in voting has been at historically low levels

Italy has always enjoyed high levels of political participation and has had a higher voter turnout than many of its European neighbours. In 1979, over 90% of the electorate turned out to vote, and numbers remained in the high 80s throughout the 1990s.

The populist Five Star Movement, led by former prime minister Giuseppe Conte, is estimated to have received 13.5-17.5% of the vote, which may be slightly more than polls suggested, but is a significantly smaller figure than what it had achieved in 2018 (32.7%).

5. Is this the return of Berlusconi?

Former long-time prime minister Silvio Berlusconi may no longer be a major independent figure in the election, after all, his party is merely a 'shell' of what was once Italy's biggest political force .

But Berlusconi's support for the right-wing coalition is essential to ensure he has a majority of seats, and as such, the controversial former prime minister could still wield significant influence.