Infections from Covid-19 are significantly reduced, no loss of life

"Superscandal of the Port of Durrës", Berisha: Rama forgave 1.5 million m2 to get 90% of the profit

'30 June ', Patozi: Those who imposed the crazy boycott, are silent about the scorching slap 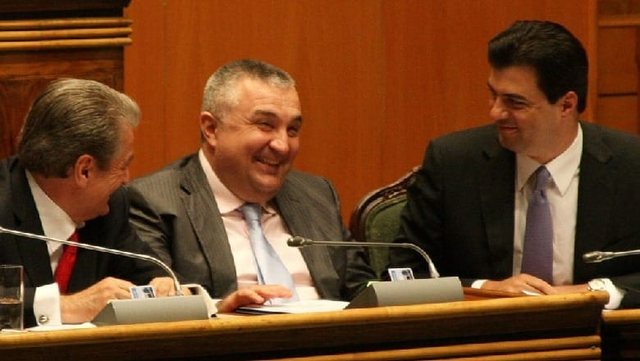 Former Democratic Conviction coordinator Astrit Patozi, in a Facebook post, blames the then opposition, including former Prime Minister Sali Berisha, Democrat leader Lulzim Basha and President Ilir Meta. According to Patoz, the three 'protagonists' knew the end of the case, so they did not go to court, but chose to remain silent, and now the loss is addressed to Voltana Ademi. .

SILENCE, WHICH SPEAKS AND MAKES THE SAME RESPONSIBILITY

Now that the Constitutional Court announced the decision to reject the request, which challenged the local elections of June 2019, the picture of the heavy political responsibility of those who then led and represented the opposition becomes clearer.

How, due to a diabolical folly, all local government was handed over to the Soviets, while this topic is not treated before, both by the "statutory" bunker, where Lulzim Basha is locked up to be protected by his party, as well as by " the "pulpit" of the peaceful revolution, which will re-establish pluralism in Albania.

Those who really made the crazy decision to boycott and others who tried to prevent the elections by any means available were fully convinced that they did not win the case, so they did not go to court themselves. Because, apparently, two losses for the same case became too much.

And they found the desolate Voltan, which has remained as a small island among the waters of the boundless power of the "Renaissance," perhaps not for any fault of its own. She was burdened with a great burden, which did not belong to her at all, because it was not her problem at all, but there is no strong reason to reject it. After all, the postman is never charged with those containing the letters inside.

So even today is not the day to seek the loss of Voltana Ademi, because she is probably the only opposition that has won the June 2019 elections, despite having no merit. But to see how they are silent at the same time about this scorching slap as if they were in the golden times of love between the "de jure" chairman of the Democratic Party, the "pulpit" and the President of the Republic.

The US base in Syria is attacked with drones

With a truck to England, the Albanian teacher is caught cultivating cannabis in the 'grass house'

Iran denies involvement in the attack on Salman Rushdie

The "real organizer", Kryemadhi takes out the photo: fix it well, you can see part of the electoral staff of Veliaj

VIPs who attended Noizy's concert as a public

Boçi returns to Balla: Sons want revenge! He who sows the wind will reap the storm

Tips that every girl should know before the wedding

Gjekmarkaj: In September we expect a heated political war, the main file for Ilir Meta

Infections from Covid-19 are significantly reduced, no loss of life

Analysis of 'The Guardian': Skyscraper dedicated to Skanderbeg in Tirana, the vision of the empty towers of Rama

The dolphins are "raging", why some of them are becoming aggressive and attacking people

Rama for the French media: Albania was once the North Korea of ​​Europe, after 10 years we will be in the EU

How much should you pay to take a picture with Emilia Clarke?

Actress Robyn Griggs has died at the age of 49

After 25 years of marriage, the member of 'Metallica' announces the divorce

From Covid-19, the connection with France to the EU/ Rama interview for "France Soir", where he sees Albania after 10 years

The project of the Port of Durrës worries the opposition, shadows beyond the 3D plans

"Superscandal of the Port of Durrës", Berisha: Rama forgave 1.5 million m2 to get 90% of the profit

"I come to the house of Albanianism as a son and brother"/ From Dick Marty's report to the dialogue with Serbia, Begaj's first statement in Pristina

"You are our voice, where we have no representation"/ Osmani krah Begajt: Time for an Albania-Kosovo defense treaty in case of danger

A drowned person is found in Lanabregas, the police: We are working on his identification

DP for the incinerators: SPAK knows the answers, but they lead to the top and the prosecutors cannot go there

Kurti for the Financial Times: 4 things Serbia loves. If the West allows this game, tensions will continue

Video/ Begaj is welcomed with a state ceremony by Vjosa Osmani in Pristina, the agenda of the 2-day visit

Deterioration of life in Tirana, Vasili: When it is run by thieves and talkers, it only gets destroyed

Albanian patents will also be recognized in Saudi Arabia, the ministry announced

Meta shares the video with the cries of "Rama ik": He will give an account very soon for the colossal damage to the country

Index/ The quality of living in the capital is deteriorating, it remains the last in Europe

The week starts with rising temperatures, the weather forecast for today

High temperatures are back, the weather forecast for next week

After a week in a coma, the famous actress died at the age of 64

The 22-year-old Australian woman is injured in Himare, she is urgently sent to the hospital

"It's your turn": After Salman Rushdie's attack, the author of the "Harry Potter" saga is threatened

Soon to be a father, Brooklyn Beckham reveals plans for expanding his family

Tonight, the night of surprises. Noizy reveals details from the concert

After Britney's clashes with the children's father, J.Lo publicly supports the singer

"The place of birth is a trust", the festival enlivens Fushë Arrëzi

Covid-19 during the last 24 hours in our country: 459 new cases and one loss of life

The well-known Albanian cinematographer Kristaq Dhamo has passed away

After the famous slap at "Oscar", Will Smith appears for the first time in public with his wife

Berisha publishes the citizen's message: Nuredin Dumani was in Golem last night, accompanied by the police

Europe is hit hard by drought

He injured the IMT worker, the author's testimony is clarified, he does not regret it

The EU invites Kosovo and Serbia to end the inflammatory rhetoric

4 young people lose their lives in an accident in Italy, among them a 19-year-old Albanian

Tomorrow starts the second phase of registration for the first and tenth grades, the deadline

The Sun: How Albanians are inspired by "London boats", after rafts they end up in the clutches of drug gangs

Injured in Kuçovo, Bejo was shot by a neighbor after a quarrel, the perpetrator is wanted

The rock massif breaks off in Jonufër of Vlora, causing traffic

Several wounded by the shooting in Jerusalem, suspicions of a terrorist attack

The Times: Albania, the 'rival' of Greece and Croatia in tourism, how the British are being "seduced" on TikTok

Horoscope, what the stars predict for you today

Cloudy and showers, as the weather forecast for today

He was injured today in Kučovo/ In 2007, the 45-year-old tried to kill two brothers

Shots fired in Kuçovo, one injured

Even citizenship with concession? The government with VKM that 'advertises' the Albanian passport

"The author removed the family from the scene", details from the massacre in Montenegro, suspected of premeditated murder

Elizabeth II in Has/ Daily Mail report: The city is being emptied by the exodus of immigrants, young people dream of England

Video/ How did the Himara tragedy happen? The witness recounts the scene of the event, the maneuvers that took the life of the 7-year-old

The Ministry of Education has prepared a draft with legal changes for the pre-university education system, based on the numerous reported cases of violence, a...

In Albania, almost half of the employees work without pay in the family business, but a large category of employees received monthly wages below the poverty l...

Analysis of 'The Guardian': Skyscraper dedicated to Skanderbeg in Tirana, the vision of the empty towers of Rama

A new tower will be added to Tirana with the shape of the face of Gjergj Kastriot Skënderbeu. The prestigious British "The Guardian" has dedicated an ana...