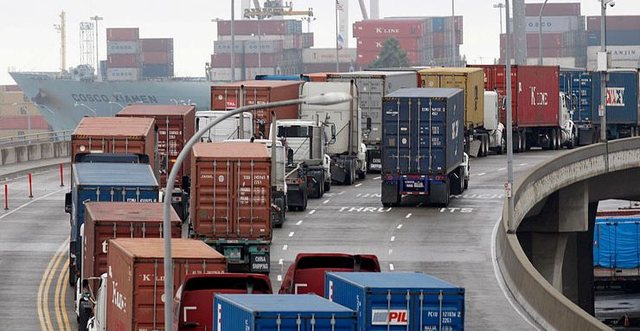 Exports from Albania to Kosovo marked a sharp decline in the 10th month of this year.

The detailed data from NSTAT show that during January-October 577 thousand tons of goods were exported to Kosovo from 964 thousand in the same period of 2020 with a decrease of 40 percent.

As a result, exports to Kosovo accounted for 18 percent of total Albanian exports in 10 months, from 28% a year ago.

The reason for this decline is mainly iron and oil. The opening of exclusive services for Kosovo in the Port of Durrës has led to the direct supply of oil, cement and iron to Kosovar companies. Previously, these supplies were carried out by Albanian iron and cement companies

With the increase in electricity costs, Kurum, the iron production company in Elbasan, decided to close production, since imported iron came at a cheaper price. Currently, both Albania and Kosovo are supplied with imported iron.

More detailed data from INSTAT show that the drop in exports to Kosovo was created by the lower volumes of exports of materials, construction, iron and oil.

The largest decrease was recorded in the export of lime and cement. During the 10-month period, 218 thousand tons of lime and cement were exported, or 47% less than the same period of 2021. Coal and steel decreased by 25% and ores by 71%.

On the other side with growth were the exports of greens, grains, fertilizers and magazines and books.

Exports of vegetables in quantity increased by 5%. Kosovo is the main market for Albanian greenhouse products. But this year saw a strong increase in the export of fertilizers for agriculture.

Market actors claimed that the demand for fertilizers from Albanian farmers has dropped significantly this year, so the quantities that were previously imported to Albania are being re-exported to Kosovo.

This year, exports of Albanian grain to Kosovo and some products of the milling industry and honey have increased.

In recent years, Albania and Kosovo have held several joint meetings, the basis of which was the facilitation of trade and the creation of common markets.

But against the background of meetings and hundreds of agreements signed between public entities, trade between two states of the same nation has progressed very slowly.

Trade relations mark more episodes of conflict than ease to increase the common benefits from the opening of markets./ Monitor