'You are ugly, you do not have the right to go to the party' / Is this text of the primer in Albanian schools an incitement to bullying? 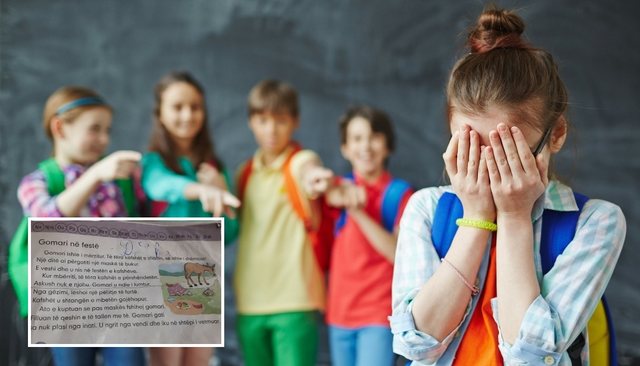 Often, textbooks have become the subject of debate about their quality, the mistakes or the messages they convey to students.

One of them seems to have bothered parents of first graders. As seen in the picture below, the story illustrating the letter 'G, g', is about an animal, in this case the donkey, which is excluded from other animals only because it is ugly, if we refer to the text of the first grade primer. 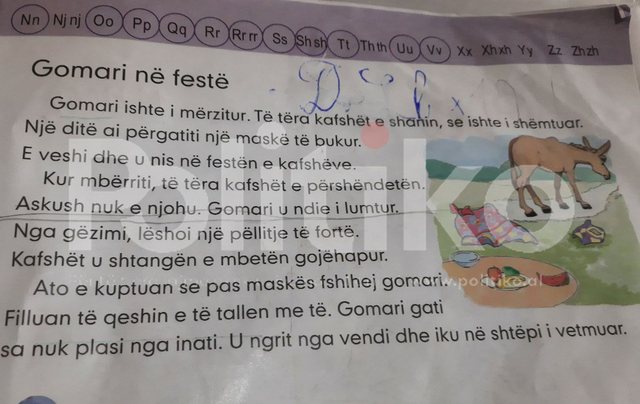 Moreover, according to the text, the donkey, in order to feel happy, is forced to put on a mask that is not recognized by other animals.

But what is the fable that a 6-7 year old student gets from this story and is it in itself a pure incitement to bullying, through which everyone understands that if someone describes another person as ugly, they have no right to take part in a celebration just like the others and moreover should be disguised and not be himself.

Bullying is repetitive, harmful and aggressive behaviors between people that vary in their level of strength and can be both physical and psychological. They include hitting, beating, verbal harassment, offensive gestures, expulsion, or simply pressure to adapt to what the bully wants or says.

Bullying has negative effects on the psychological health of young children, but it does not only affect victims. Bullies are also at risk. Studies show that those who have been bullied in childhood are addicted to alcohol and drugs, abuse their partners, engage in criminal activities, and have negative relationships with friends.

Therefore, according to experts, preschool institutions, parents and community groups should work together to combat bullying, as this phenomenon can be devastating for the child's self-esteem, and this may be done by reviewing textbooks from the beginning. , abetaren.