Without cell phones and cars, the modest life of the Albanian cocaine boss, how "Jimy" lived to hide his identity 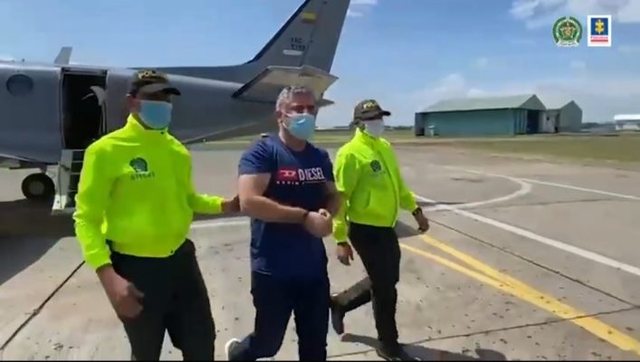 Despite producing $ 2 billion a month for the Balkan cartel, 'Jimy' had no cars or cell phones, lived in rented accommodation, claimed to be a civil engineer and traveled only on airlines and public service vehicles. For seven years, Agim Cerma, an Albanian, arrived in Colombia and chose this lifestyle, according to authorities, so as not to reveal what it really was: the European criminal organization's connection to the 'Clan del Golfo' and the FARC dissidents .

According to foreign media, in 2014, the Albanian arrived in the country with his wife and stepfather. He rented a house north of Barranquilla and from there started his criminal network.

'La Arenosa', according to the investigation, seemed to him and the gang the ideal place, as its proximity to major ports would facilitate the delivery of cocaine hydrochloride to motor boats sailing to the United States and European destinations.

Not to mention that inside Colombia, exactly in the department of Valle del Cauca, 'Jimmy' apparently coordinated charter flights, to send drugs to Europe.

Shipments were more and more, and with this Cerma also had to think about how money from medicines would enter Colombia. Investigations revealed that this income was provided through financial intermediaries, known as 'intermediaries', i.e. from third parties.

With the proceeds, little by little the connection between the Colombian criminal groups and the Balkan cartel was strengthened and this meant that "Jimmy", ostensibly the main investor in this illegal maneuver, had to increase the production and production of alkaloids. This is how, according to investigators who tracked him down to the day of his capture, he would have bribed large sums of money from senior officials to control flights to the country to facilitate drug shipments.

"During the investigation it was determined that he was using Alfonso Bonilla Aragón International Airport, in the municipality of Palmira, Valle del Cauca, in collaboration with several civilian officials who worked there," said a judicial source related to the case.

The power was increasingly visible and to take care of the Albanian "business", from the Atlantic capital, articulated the four-part movements that, apparently, were responsible to him and ensured that everything went perfectly . William Cruz Pérez, Pedro Antonio Penagos Londoño, Jairo Fernando Cardona López and Edwin Durlandy Montilla González, according to authorities, became his trusted men.

Cardona López, allegedly worked as a supervisor for air traffic controllers; Penagos Londoño would have been responsible for the logistics and transportation of the narcotics; Montilla González allegedly had laboratories for the production of cocaine hydrochloride in northern Kauca; and Cruz Pérez, presumably, was the coordinator and was considered Jimy's right-hand man. All those mentioned, who were caught during raids in Santander de Qulichao, Tuluá and Cali, have an extradition order to the United States for drug trafficking.