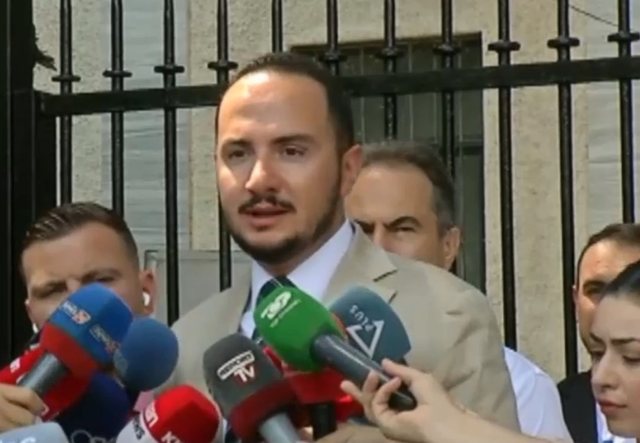 The court session for the "Babale" case, which was to be held today at the Court of Appeal, has been postponed to July 18 at 2:00 p.m.

The reason for the postponement of the session was the absence of Judge Elona Toro in the session, who is suspected to have been infected with Covid-19. In the session was the deputy Ervin Salianji sentenced by the decision of the First Instance to 1 year in prison, while he was also accompanied by the democratic deputies: Luan Baçi, Saimir Korreshi, Elda Hoti, Flamur Noka, Luciano Boçi, Belind Këlliçi, Selaudin Jakupllari, Kasem Mahmutaj, Bledion Nallbati.

After the postponement of the session, Salianji said in a statement to the media that he did not commit any criminal offense, but only made a denunciation of a convicted person.

"Due to the lack of lawyers and also a member of the jury, the session was postponed. Delay and delays are constant whenever a person seeks justice. The complaint is complete, all elements are present

There was no criminal offense. In my case I have presented evidence to present to the public and prove my innocence. We are in a case that looks like it is complicated, but it is very simple. I did not file a report, but a denunciation of a convicted person. It's not just this false witness. There is also another character, a person known as Agron Hyseni, whom the police and the Prosecutor's Office tried to introduce, as Agron for Agron. The voice is similar, according to British expertise, to that of the denounced person. The prosecution and the bodies did not do what they should have done, dealing with the whistleblowers.

Not only do we stand by it, but the fact of the investigation by the prosecutor's office fully substantiated what we denounced and even more structures were involved to protect the state drug trafficking carried out under the protection of the former Minister of the Interior, currently a deputy of the SP. There is no property investigation for Fatmir Xhafa, as the brother of an OFL subject" , Salianji declared.

Asked what he will do if the Appeal upholds the decision of the First Instance, Salianji said he will implement the decision.

"What will I do, I will jump up, I will implement it. I am telling them the fact that everyone has either left the vetting or resigned. Today, those who have made a decision are not in the judicial system. I am sure that there will be a decision on innocence", said Salianji.