The Eid letter for Charles...that it would have been better not to have written

The letter of condolence of the President of the Republic to King Charles III will undoubtedly be remembered for the unforgivable blunders that show not only incompetence and ignorance, but also an old mentality protected by the 'past regime'.

In just five paragraphs, things remain in my mind that not only should not be written in such a letter but would be ridiculous to think about at a table of friends.

In the second paragraph, he describes him as a 'dedicated citizen'...

In the third paragraph, he adds Northern Ireland and Brexit to the difficult challenges, a decision taken by referendum by the British themselves.

In the fourth paragraph in one sentence there are two mistakes: 'In modern times when the monarchical system seemed outmoded...'

But following this strange sentence, he addresses His Excellency with the word, His Majesty, that is, with one drop of the pencil, he lowers him two ranks. Your Majesty, Your Highness, Your Majesty.

And at the end, the address where 'Buckingham Palace' should have been missing.

However, the positive side must also be seen. Imagine that the President had read this text and forwarded it to the public as a video message. It would be the classic case of a man reading a text who not only did not write the content himself but does not even understand what he is reading.

It's a luxury to ask people in the Presidency to read a book about the Monarchy, but maybe they can learn something about the Monarchy and especially about the late Queen by watching the Netflix series 'The Croën'. It seems that they haven't seen it yet because if they had followed it, they wouldn't have written in the paper about 'devoted statesman', about 'the superior monarchical system' for 'Her Excellency' and count as a challenge to the 'extended conflict' in Northern Ireland' or 'Brexit'.

Everyone already accepts that the President who was chosen by the solid majority of this country as the best candidate he had - must do well in at least the ceremonial role and not leave room and reason for the voices in the majority that 'this one and not that one deserves a dismissal motion' '.

On the other hand, let's hope that King Charles III while reading this letter, will think that it was written by some comic who stays in the royal palace to entertain the courtiers and not the high representative of the Albanians who is now clearly who they have as head of state. 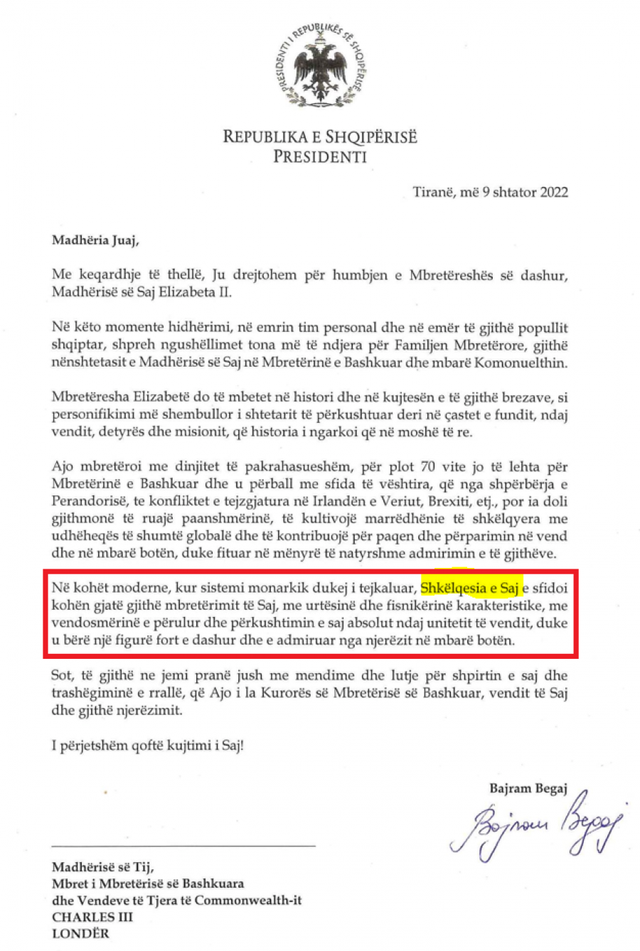 ECB: Eurozone inflation has not yet peaked

Rishi Sunak: The golden age of Britain-China is over

Temperatures drop significantly, what will the weather be like today

Dua Lipa 'electrifies' Tirana: Happy! Love you so much

Flutura Açka: Once politicians sold themselves for the homeland, now the opposite happens

Balliu accused the government: The more you smoke cocaine in the PS, the higher you climb in your career

Portugal wins 2-0 against Uruguay, qualifies in the 1/8 stage

Juventus is shocked, the management board resigns

The 55-year-old died in a bar in Korça, the police suspect

UN: The humanitarian situation in southern Ukraine is very critical

The Kosovar commentator ignores Serbia, does not mention the names of the players during the match

Kurbin/ Shot a firearm in the air, the police announce a wanted person

'Dreams and loves of a lifetime', the individual and collective rise and fall of a degenerate society

Berisha releases the video of the Albanians in the raft: This is the 110th anniversary of Independence

"He gave me the most passionate kiss": The 51-year-old actress talks about Prince Harry

The Greek Prime Minister's visit to Albania on December 6?

Russia postpones nuclear arms control talks with the US

Weather and temperatures for this week: Rain returns

"We had debates with colleagues from the Balkans", the German president talks about the integration of Albania

Problematic Albanians? Dua Lipa: The tragedy of how politicians see us

Why the two Assemblies did not unite, but emphasized the divisions and problems of the Albanian nation

On Independence Day, the anniversary of the birth of Adem Jashari

Dua Lipa received the Albanian passport, the news is reflected in the world media

Another scandal is related to the Balenciaga brand: Who is the 'satanic' designer?

Corruption and tariffs hinder the growth of Albania-Kosovo trade

Expert: Since September, 50,000 WhatsApp passwords have been stolen by Russian hackers

The European Public Prosecutor's Office (EPPO) announced on Tuesday that it had uncovered the largest cross-border VAT fraud scheme ever investigated in the E...

Over 15,300 Albanians have sought asylum in Great Britain and the EU in 2022 alone, although the number remains lower than before the pandemic. According to ...