Archive / June '93: Berisha's letter to world leaders after the expulsion of Priest Stamos and the Greek 'Sweeper'

Part of the "PRINT" section opened by Politiko.al with materials extracted from the funds of the Periodical and the Book of the National Library. Newspaper "RD", Tirana, on 28.06.1993 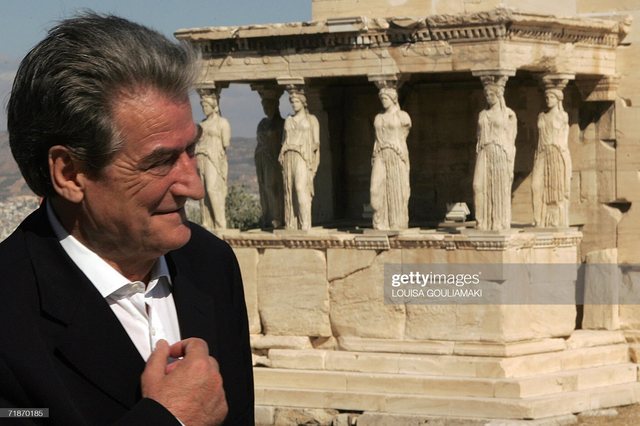 The purpose of this letter is to inform you of an action taken by the Greek authorities on 28 June 1993. Greek police launched the operation of mass deportation of Albanian refugees living and working in Greece, providing assistance to themselves and their families. They have also contributed to the enrichment of Greece which is recognized by the Greek government. So far, 4,000 people have been caught, ill-treated, beaten, torn documents, and forcibly deported to Albania without being able to get the money they earned or their belongings. The vast majority of them were provided with regular visas and residence permits issued by the Greek authorities.

The pretext for such an action by the Greek authorities was the removal by the local Albanian authorities of Gjirokastra of the Greek priest Costa Stamos, whose activity has gone beyond the religious sphere. In this activity, he, together with other Greek political and religious circles, have engaged in open territorial claims, and clandestine distribution of maps, tracts, and brochures that represent or seek the Hellenization and unification of southern Albania with Greece. This activity is echoed by the broadcasts of Greek radio stations in Corfu and Ioannina. The purpose of this policy is to undermine the goodwill and cooperation between the two countries, the peace, and stability that our region so desperately needs. It is a clear expression of intolerance and myopia, which promotes hostility and revenge in the Balkans. Unfortunately,

We also emphasize that the Greek citizen Kosta Stamos is only a self-proclaimed archimandrite of the Albanian city of Gjirokastra because such a function does not allow him to exercise the statute of the Albanian Orthodox Autocephalous Church. For this, we clarify that a year ago, the patriarch of Istanbul in complete contradiction with the statute of the Albanian Orthodox Autocephalous Church and without consulting the religious or state authorities of the country appointed in Albania four Greek priests, the archbishop, and three archimandrites. After discussions, it was agreed with the archbishop that he should temporarily remain as archbishop of Albania, while the appointments of the archimandrites were annulled. The Greek government authorities, who have surprisingly insisted on this, have received the same response from us.

Judging by the activity of Mr. Stamos, in contradiction with the constitutional law of the country and the statute of the Albanian Autocephalous Church, harmful to the integrity of the country and to the bilateral relations with Greece, the Albanian authorities took the decision for him to leave Albania. This decision was previously communicated to the Greek authorities, through the Greek Consulate General in Gjirokastra, which accepted this decision. The incident that occurred during the implementation of this decision is mainly due to the incorrect attitude of the officials of the Greek Consulate General in Gjirokastra and the ecclesiastical authorities that were there.

I fear that the case of the Greek citizen Costa Stamos is just a pretext for a chain of retaliatory actions of a policy that could result in further destabilization of the situation in the Balkans.

The Albanian government has had a major concern in the implementation of human rights, to pay close attention to the rights of the Greek minority. This minority becomes as such, can move freely, be educated in the mother tongue, and practice its religion in Greek currently there are many priests who have come from Greece and perform religious services freely everywhere in Orthodox cult institutions without any obstacle, to have its own media, etc. All these rights are realized in practice, as observed by various foreign official delegations.

In this context, the mass deportation of Albanians from Greece, especially the vast majority who are provided with proper documents such as passports, visas issued by official Greek authorities, arrest, and ill-treatment constitute a serious violation of human rights, provided for in the Universal Declaration of Human Rights, the 1951 Convention and the 1967 Protocol on Refugees, the Copenhagen Document and the Charter of Paris, the Conventions against Torture and Other Cruel, Inhuman or Degrading Treatment or Punishment.

Finally, I want to affirm once again that Greece and the Greek people have given great help to Albania during this difficult period that is passing. Therefore, we have expressed our gratitude to them. But, of course, it would be inconceivable for us to accept the conditionality of this assistance with the violation of the sovereignty of the country. The current developments affect the cooperation and good bilateral relations, built on the basis of goodwill, for which we are seriously committed to the Greek Prime Minister Mr. Micotaqis.

Expressing once again my determination to work diligently for the development of relations and friendship with Greece and the Greek people, I request the intervention of your authority and the organization you represent in order to end this situation as soon as possible.

Thanking you for your help, please Your Excellency, accept the assurances of my highest consideration.