Port of Durrës/ Várhelyi worried: Transparency is needed, so we canceled the grant 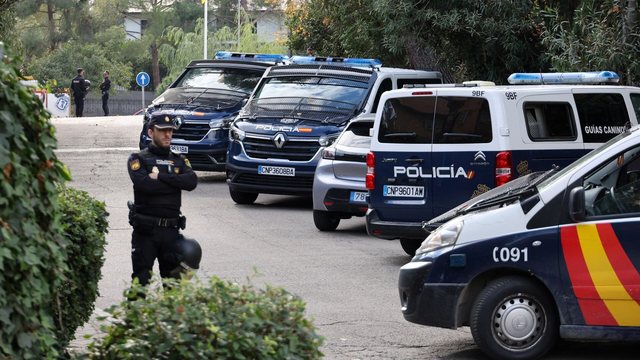 Police in Spain are looking into a possible link between two letter bombs sent to the Ukrainian ambassador in Madrid and an arms company that makes rocket launchers donated to Kiev, police confirmed in a statement on Wednesday.

In the first incident, an officer of the Ukrainian embassy in Madrid was injured when he opened a letter bomb addressed to the ambassador. Kiev ordered increased security measures at all embassies abroad.

The letter, which arrived by regular mail and was not scanned, caused "a very small wound" on his finger when the officer opened it in the embassy courtyard, Mercedes Gonzalez, a Spanish government official, told Telemadrid television.

Ambassador Serhii Pohoreltsev told Ukrainian news site European Pravda that the suspicious package addressed to him was delivered to the embassy commander, a member of Ukrainian staff.

"The package contained a box, which aroused suspicion in the commander who decided to take it outside - without people around - and open it," Ambassador Pohoreltsev was quoted as saying.

"After opening the box and hearing a click, he dropped it and then heard the explosion. Despite not having the box in his hand at the time of the explosion, the commander injured his hands and suffered a concussion."

Zaragoza government representative Rosa Serrano said in an interview with the SER station that the two envelopes appeared to have the same sender, as the same e-mail address was written on the back of both. Ms Serrano said the packages came from Ukraine and this alerted the arms company, which called the police.

The arms company is Instalaza, the manufacturer of the C90 missile that Spain is donating to Ukraine.

After the first incident, Ukrainian Foreign Minister Dmytro Kuleba ordered all of Kiev's embassies abroad to "urgently" strengthen security and asked Spain to investigate the attack, a ministry spokesman said.

The Ukrainian government did not immediately respond to a request for comment about the second incident.

Ambassador Pohoreltsev later told TVE that he was working as usual at the embassy "without fear".

"We have instructions from the ministry in Ukraine that given the situation we are prepared for any kind of incident, any kind of Russian activity abroad," he said.

Spain's Supreme Court has opened an investigation into the attack as a possible case of terrorism, a judicial source said./ VOA

Survey data: Work has become more digitized for one in two Albanians

The EU's proposal for the agreement with Serbia, Kosovo's opposition: Without recognition, unacceptable

Integration in the EU, Santos: Reforms must be accelerated, it has not been completed in law

Local elections, PD submits to the CEC the list of members of the CEZs

Britney Spears angry with fans: You violated my privacy

Expelled from the Assembly, Berisha tells what he will do on Thursday

Berisha talks about the investigation of the scandal: Rama also used McGonigal's predecessor

Berisha's warning: Albania will explode with the greatest force for Rama's departure

Pandemic and global crisis, Bill Gates optimistic about the future of humanity

Ducka opens a lobbying office in 2017/ Is the activity of this company related to the Russian financing of Basha?

Chip restrictions on China, Japan and the Netherlands join the US

Berisha paid tribute to the death of Isuf Kalos: He left a valuable contribution to medicine

Kidnapping of Albanian children in Britain, DP condemns the government's silence: Where is Rama?

As the war enters its 12th month, Zelensky's government is cracking down on corruption

McGonigal's ties to another Russian oligarch revealed, how he was hired for luxury hotel chain security

The journalist denounced lobbying for former KLA commanders: I was threatened by Agron Neza

Port of Durrës/ Várhelyi worried: Transparency is needed, so we canceled the grant

Crime monitors the territory/ Dozens of cameras installed by the "strong" are dismantled, under investigation Avdylajt

The MP commemorates the victims of the holocaust and the massacre of the Chams of Paramithi: Moment of reflection

The McGonigal scandal shakes the USA/ The resignation of the head of the FBI is demanded, Rama hides by attacking the Democratic Party

How McGonigal intervened with the owner of a pharmaceutical company in Bosnia to give $500,000 to Agron Neza

McGonigal's ties to President Biden's son are found, the two cases in which he is involved

The 'McGongial' case/ Berisha cut: The final test is needed, the opposition must destroy Rama, or themselves

After the closure, the breweries are considering moving production (and jobs) to Serbia

Rama asked for more funds, the EU ambassador responds: I do not agree with this, Albania receives 100 million euros per year

Will there be "non grata" from the EU for Albanian politicians? The ambassador explains the rules

Berisha: We will establish cooperation in the USA to raise the 'McGongial' case there

How was Edi Rama implicated in the scandal in the USA? Andi Bushati breaks down the scheme

Washington Post: The latest scandal should bring the final punishment for the FBI director

The "McGonigal" case, Artan Hoxha: Agron Neza served as a source of information for the FBI

Shkëlzen Berisha in SPAK, head of DP: He was called to divert attention from the 'Rama-McGonigal' super-scandal

Zeka speaks with names: These are the two Kosovo politicians who met with Agim Neza

Rama's connections with the FBI official, Krasniqi: He has lost the credibility of the main international offices

The car hits the pedestrian to death in Cerrik

Journalist: The 'McGonigal' scandal should also be investigated in Albania

French Foreign Ministry: Neither we nor our allies are at war with Russia

Considered one of the most beautiful in the world, the model passed away at the age of 27

"Civil disobedience", Berisha appeals to the democrats: Rama will fight in the final battle of our war

Knife wound in the center of Shkodra, the first details

"Engaged a powerful figure of the FBI against the PD", Berisha at the conference: Rama should leave immediately!

The romance of Kiara and Luiz makes Flori nostalgic, he remembers the kiss with Soni Malaj. The singer reposts it

"I advise him as a former friend to shut his mouth", ex-minister: Rama will be called to the USA to testify about the 'McGonigal' case

Begaj meets the rapporteur for Albania in the EP Isabel Santos, what they discussed

Parliament did not allow discussions on the 'McGonigal' case, Salianji: Today we would publish new facts about Rama's involvement

Who are the three people from Durrës who led the Italy-Albania drug gang?

122 kg of drugs were caught in a truck from Albania to Turkey, the Albanian driver was arrested

Science declares the most beautiful man in the world

Former agent McGongial shareholder of a business in Tirana, how he lobbied for the hydrocarbon concession

The former mayor of Lushnja is released from prison

Charles McGonigal's experience as an FBI agent, when he started working with the Russian oligarch

Actor competitors of "Squid Games" have been mistreated in reality: They threaten "Netflix"

DP demands the dismissal of Lindita Nikolla: He defiled parliamentarism by undermining the democratic functioning of the Assembly

Mega operation/ The network that operated in many European countries was run by 3 Albanians, SPAK gives details

The price of diesel is reduced by 4 lek, gasoline is increased

Wray spoke publicly for the first time about the case against Charles McGonigal, a former special agent in charge of the FBI's Counterintelligence Division in...

Charles McGonigal, one of the FBI's top officials, was indicted on two counts on Monday night, including an all-expenses-paid trip to Tirana where he met with...

Despite the fact that Prime Minister Edi Rama claims that the American judiciary has closed the investigation into the affair involving former FBI counter-int...