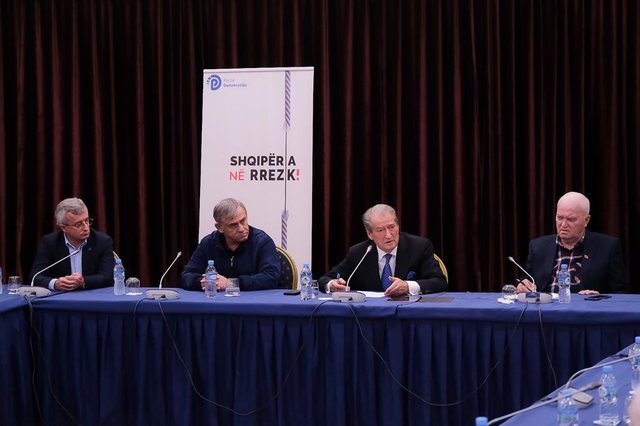 The head of the Democratic Party, Sali Berisha, accuses Prime Minister Edi Rama of holding a contemptuous attitude towards the employees in the country.

Speaking at a table with the trade unions, Berisha focused on a specific case, where according to him, a lecturer of the University of Sports was dismissed today by the direct order of Edi Rama.

Berisha: In the truly dramatic situation in which Albania is today, employees, teachers, doctors, miners, small businesses, young people, students, pensioners, citizens with economic assistance. It is an unprecedented situation, unprecedented in Europe and beyond. It is a great reversal of the economic and moral situation, in relation to the despair and pessimism, of the complete lack of perspective with this government, which, as you yourself witness, is nothing more than a giant fraud machine towards the Albanian citizens, in every statement, signature, word.

It is a giant machine of theft and robbery of Albanians, an unparalleled looter of public funds, of national assets, and unparalleled theft directly into the pockets of citizens with prices.

You are a unionist, but I assure you that there has never been a colonial regime that exploited a colonized people, as Edi Rama and his government brutally exploits the Albanian people. You are witnesses and you know how the fabulous assets of the Albanians, which amount to billions of euros, with their value have turned into a real curse for the citizens of this country. They are wildly exploited by government clients, while the Albanians benefit from them, nothing more than the colonized, from the beginning of this century, from the exploitation of colonial companies.

You are witnessing how the salaries of teachers, doctors, nurses, policemen, soldiers, miners, and the private sector, during these 9 years due to the more than doubling of the prices of basic living products, not that they have not increased, but today at least 30% lower than in 2013.

You are witnessing what contempt, contemptuous intention is held today towards the employees in this country, towards the wage earners of this country. What a real saddle rests on their necks with the prices.

Today, a lecturer at the Sports University is fired even though the Senate and the Ethics Commission vote against his dismissal, the tyrannical rector implements Rama's order and removes him from the system. There are hundreds of such cases. There is nothing more insecure in the world than the employees in Albania. A few days ago, I brought an example, a model teacher, 30 years high school teacher, and now the principal takes her classes and they tell her to go to school. It doesn't happen anywhere, it can't happen, there is no law that allows such an act, to throw away employees like rags, after they have melted their lives for the good of society and the profession.