From Tirana, Durrës and Gjirokastra, who are the delegates who have signed in favor of the Assembly of Berisha 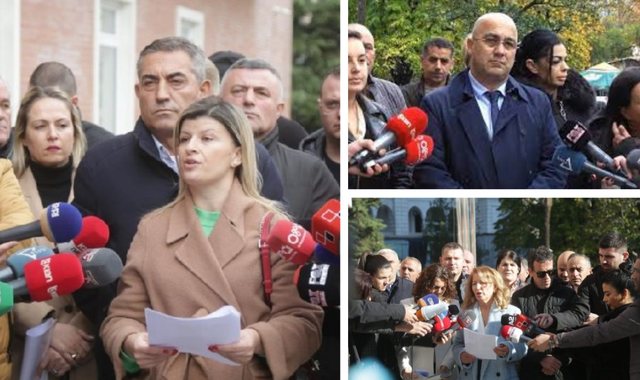 With 9 days left until the December 11th Assembly meeting, the DP branches in Tirana and in the districts continue to publish the names of the delegates who support the call of former Prime Minister Sali Berisha.

For days, the supporters of the former chairman of the Democratic Party, Sali Berisha have continued with the publication of the names of the delegates who have signed in favor of the meeting of the extraordinary Assembly on December 11.

It was the Democratic MP Agron Shehaj who initially started the verification of signatures at the office of the head of the National Council of the Democratic Party, Edi Paloka.

Shehaj, accompanied by DP leaders, verified the signatures of the delegates of units number 5 and 7 in Tirana, calling the delegates to confirm the fact that they have voluntarily signed the form for convening the Assembly on December 11.

Sali Berisha himself has stated that he has managed to gather over 4200 signatures needed to convene the National Assembly to retake the Democratic Party and make changes to the statute.

But how many delegates have publicly declared in favor of Berisha:

Branch 4 of the Democratic Party in Tirana has signed 97 delegates out of 111 in total.

Branch 6 of the Democratic Party in Tirana, have signed 58 out of 65 Democrats

Branch 7 announced that out of 86 delegates, 46 have signed to join Sali Berisha.

In branch number 9 of PD in Tirana from 91 delegates have signed 71 delegates.

There are 66 delegates in the PD branch in Paskuqan or 85% have signed up to participate on December 11th.

The DP branch in Elbasan publishes the names in favor of Berisha: 272 delegates out of 409 in the Assembly of December 11!

The DP branch in Durrës has signed 207 delegates out of a total of 275.

For weeks, the representatives of the Democratic Party branches who have joined Sali Berisha's rostrum have their signatures in the office of the Head of the National Council, Edi Paloka.

The December 11 Assembly will focus on changing the status and dismissing Basha.

The Democratic Party has convened two National Assemblies, one on December 11 and another on December 18, convened by the leader of the Democratic Party, Lulzim Basha, who has warned that anyone who violates the decision of the Party Presidency, including Sali Berisha, the fate is determined by the Statute of the Party. By this he meant that whoever appears in the Assembly convened by Sali Berisha will have consequences.