"We will turn to KAS", Boiken Abazi complains to Celibashi: Our observers were obstructed by the police, nothing is understood on the cameras 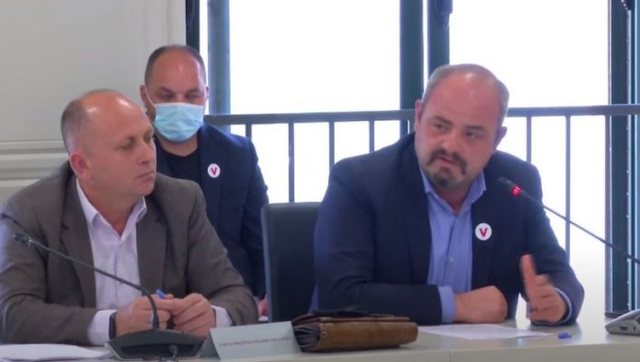 The chairman of the Vetëvendosje Movement in Albania, Boiken Abazi, who ran as an independent candidate in the April 25 elections in Tirana, was the only one who opposed the certification of the election result during the CEC meeting.

He told him that in some counting centers many problems have been found, from the alienation of the will of the citizens, to the cameras and the detention of observers by the police. Abazi warned that he would file a complaint to the KAS with all complaints encountered during the elections. According to him, there was an orchestrated plan to make his votes invalid.

"We will file a complaint to KAS. We have seen irregularities and legal violations in the district of Tirana. Our observers were prevented by the police and the CEAZ from following the count. There are 18,000 invalid sheets. We have heard that there will be expertise for them. What will happen to this process? We are convinced that there was an orchestrated plan to place one or 2 "X's", to make it intentionally invalid.

In your 360-degree cameras, a distorted image appears and nothing is understood. In the film materials we received are missing CEAZ 31, from 17:00 on the 26th, the 360 ​​degree camera does not exist. CEAZ no. 33 date 26 April 360 degree camera from 2 am no material. CEC no. 39 for all dates missing 360 degree camera. I do not know if it is a technical problem. I do not know if the CEC has ascertained the total lack of images? Nothing is understood in these 360 ​​degree cameras, in the next elections to have more cameras of this type. They present a distorted image by not understanding anything with the bunch of letters. CEAZ no. 30 in Bërzhitë center 1607 we recorded two votes for the independent candidate not counted, we came out with zero. At unit 7 CEAZ no. 37, 1902/2, 5 additional clean votes not cast on the table. In Katund i Ri on April 26, the counting took place only with the participation of one group, not others. One of the counters placed an "X" in front of our observer's face after refusing to leave. "At the Red School we disappeared from reporting that day." - were some of the irregularities denounced by Abazi at the CEC meeting.

The head of the CEC, Ilirjan Celibashi, guaranteed that he would follow him and would report all violations to the prosecutor's office.

"From a procedural point of view, we approve today the results based on each polling station, which means a strict reflection of what the CEAZ has deposited with the CEC, this does not deprive them of the right to present all those concerns that you have to submit through a complaint within 5 days.

I reconfirm you, that the CEC is also interested in seeing how the behavior of the commissioners was, we have all the footage, we will make our own observations and we will address the findings to the prosecutor's office. If anyone has thought of it as something that will pass, it will not pass. To assure that we will not be indifferent " said Celibashi.

The CEC approved this afternoon the table with the official results of the April 25 elections in the 12 regions of Albania, where the Socialist Party is ranked first with 74 seats, PD 59 seats, LSI 4 and PSD 3 seats.