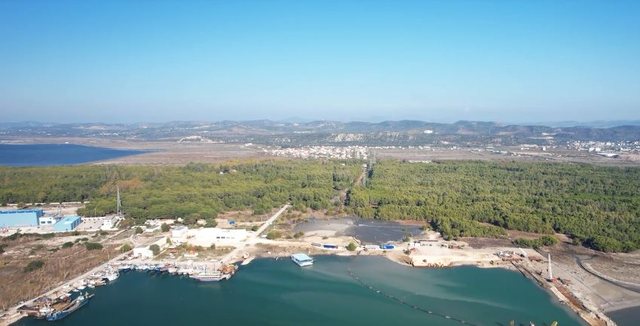 A project by the Albanian government to put into operation a floating thermal plant in order to alleviate the energy crisis is opposed by environmental activists and tourist operators in the city of Vlora, who fear pollution of the coast and damage to tourism. The following material was prepared by the BIRN Network in cooperation with the Voice of America.

In a corner of the Triport in Vlora, two dredgers work to deepen the entrance to the fishermen's port. There, a pump continuously draws water and sand from the sea, which pours a little further, forming a small artificial ramp, created by the sand left behind, as the water goes towards the pine forest.

The port is being deepened to make room for a floating thermal plant consisting of two ships, which since September have been waiting a few hundred meters further in the port of Petrolifera. The vessels leased by the Albanian Electric Power Corporation are expected to produce 110 megawatts of energy and are promised to serve to stabilize the energy situation in the country, which is mainly dependent on rainfall.

The plant will use petroleum products as fuel to produce power, while the government insists it poses no risk to the environment.

"We have checked all the parameters and we assure you that the amount of emission is also according to the criteria of the conventions to which Albania adheres," declared in September the Minister of Infrastructure and Energy, Belinda Balluku.

But environmental experts are suspicious and fear a possible pollution of the Bay of Vlora.

"If there will be a day when that thermal power plant with heavy oil will be lit, we will have a very difficult situation in the city of Vlora, understandable because there are 600 tons of oil with a lot of emissions, more pollution, extremely large," says the environmental activist, Lavdosh Feruni.

The same concern is shared by the tourist operators in the city, who see the commissioning of the plant as an attack on their business. According to the head of the "Arta" tourism association, Ervin Sota, operators in the field of tourism are afraid of "the black soot that will spread throughout the city".

Activists also complain that the installation is being done without a proper environmental study and not being held to the same standards as other businesses.

"If a simple business had a small obstacle from environmental permits, they would be canceled hundreds of times and would not be approved. But we have two standards, in this case we have an extremely serious damage to the environment and they have started work without receiving the environmental assessment," emphasizes Niko Dumani, a biologist engaged in environmental protection.

"Countries that have existing this type of industry are moving towards reducing it. Albania is starting over like 100 years ago. That is, we are in a logical paradox in this whole story that is happening," concludes Mr. Feruni./VOA

The President of the Republic, Bajram Begaj, has reacted for the first time to the case of Charles McGonigal, the former head of the counter-intelligence offi...

Operation 'Fijet', thanks to which hundreds of surveillance cameras were dismantled by criminal groups in several cities in the country, have attracted the at...