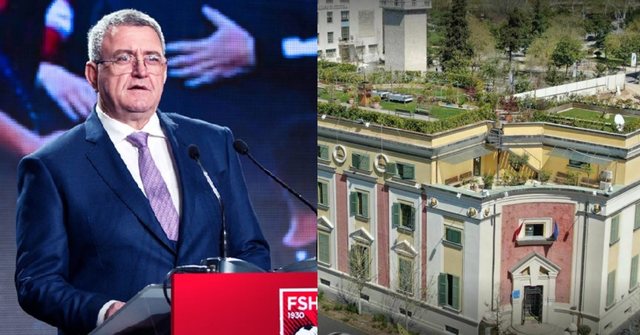 The Municipality of Tirana will request on Monday a national and international investigation, for the violations and corruption of the head of the Albanian Football Federation, Armando Duka, during his 20-year career.

Sources from the municipality suggest that for days a group of Albanian and foreign lawyers (American and British) are processing a violation file to present to the FBI, DEA, NCA, Scotland Yard, SPAK, Tirana Prosecutor's Office, Economic Crime, Money Laundering Agency, AMA, Tax Investigation, AKU, as well as American and British embassies in Tirana.

Cases of international match sales and related bets will be presented to a group of FBI regional officers. Sources say that the agents of DEA, the American Drug Agency based in Athens, will be acquainted with all the evidence of drug money, with the knowledge and support of Armando Duka.

Scotland Yard and the NCA, are investigating money laundering by foreign entities in the UK. The British file, according to sources from the Municipality of Tirana, has data on the expenses of the Duke and his family in properties, luxury cars and other assets.

Meanwhile, with the letter no. 23859 prot. on 26.11.2021, the procedural material for the criminal offense of "Abuse of Duty", provided by Article 248 of the Criminal Code, was referred to the Prosecutor's Office of the Tirana Judicial District. Criminal charges against the leaders and employees of the Albanian Football Federation. In relation to this issue, additional material was sent with the letter 23859 / k / 1, prot dated 03.12.2021. Also, with the letter 23859 / k / 2 prot. on 16.12. 2021, additional material was sent again. Sources from the Tirana prosecutor's office confirm that two more prosecutors will be added to the case to speed up the investigation.

The investigation also includes broadcasting rights, money laundering or illegal marketing contracts in football, by companies that are in Duke's possession such as: AIBA, SuperSport, EcoMarket, GoTech, Cantina Duka. These data are expected to be submitted for tax evasion to the Albanian agencies of Money Laundering, Economic Crime and Tax Investigation.

As part of the actions is also his brother, MP Agron Duka, the file will be submitted to SPAK and HIDAA, to follow his involvement in corruption.

Sources of the Municipality of Tirana claim that they have included foreign media consultants to internationalize the Duke's violations in the abuses with the Solidarity Funds provided by FIFA and UEFA, which did not go to the children's associations.

The municipality will forward the complete file to the American and British Embassies in Albania, to request the revocation of the Duka family visas.