Justice Reform, Kim: Some did not like it, we are in a critical moment; Soreca's appeal to political leaders 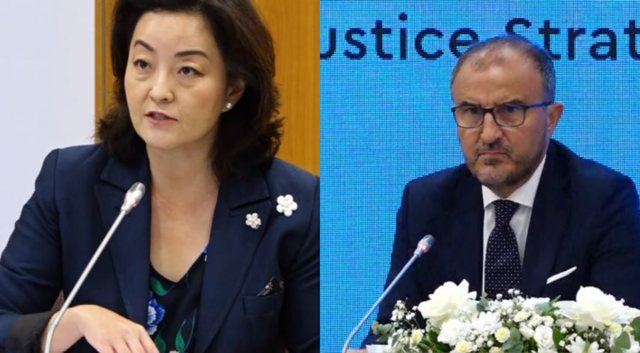 On the 5th anniversary of the Justice Reform, US Ambassador Yuri Kim said that Albania has made progress. At a roundtable on the issue, Kim said corruption was being looted and reform had begun to yield results, while stressing that there were people who did not want this to happen.

Calling it a critical moment, the US chief diplomat said there was still much to do. She underlined that the US is monitoring the work of justice institutions to implement the reform. Yuri Kim added that it is time for justice to prevail in Albania, while expressing US support, starting from the Obama administration to Biden.

"Albania has made progress and the citizens are seeing the results of these efforts. The institutions are already operational. No one is above the law. Corruption is being fought. Some did not want this to happen. Work must continue to stop corruption.

You did a good job but still have a lot of work to do. It is a critical moment. The US supports you and wants to see your work ahead. We have supported justice reform from the beginning and we will be with you until the end. "I want to emphasize that justice reform efforts have begun since the Obama administration and continue today from Biden," Kim said.

While the EU ambassador, Luigi Soreca asked nag political leaders to show a lot of leadership in order for the reform to succeed. Emphasizing its importance, he said that the objective of the coming years is the proper implementation of this reform. Soreca called for fighting corruption and working for a justice system at European level.

"It is important to demand more leadership from across the political spectrum in order for justice reform to succeed. Continuing this reform is one of the main priorities to move forward efficiently. Independence, the integrity of the Justice Reform is very important.

The main objective for the coming years is to work hard in order to implement this reform properly. Accountability will be required for involvement in the implementation of justice reform. The legal bases should be in place, the legal framework should also be in the right place, corruption should be fought. "The system must be in line with European standards," said the ambassador.