Fight with knives in a barbershop in Vlora, three people are injured

Reporting to the File Authority, the Prosecutor's Office of Tirana dismisses Meta's lawsuit

The release of Alqi Bllakos, the DP reacts: He gave a guarantee that he would not speak to spoil the work of the SP 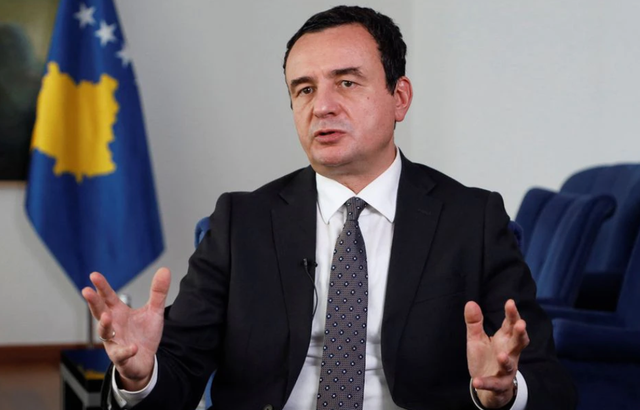 Kosovo is prepared for a possible attack from Serbia, as the increase in tensions with the Serbian minorities could lead to a new armed conflict, Prime Minister Albin Kurti said in an interview with Reuters .

Tensions between Serbia and Kosovo flared again earlier this month when Pristina said it would force Serbs living in the north, who are supported by Belgrade and do not recognize Kosovo's institutions, to start using license plates issued by Pristina.

The situation eased after Kurti, under pressure from the US and the European Union, agreed to postpone the regulation of car license plates until September 1 and NATO peacekeepers oversaw the removal of roadblocks set up by the Serbs.

"We should not rule out that these aggressive policies of Belgrade can turn into an attack against Kosovo in one way or another", Kurti said, adding "We are alert, but not afraid".

He underlined: "I am not saying that they will attack us this week or next, but it would be completely irresponsible to rule out... the possibility of increased tensions and new conflicts."

Ethnic Serbs make up 5 percent of Kosovo's 1.8 million population, which is 90% Albanian. About 50,000 Serbs live in the north of Kosovo, near the border with Serbia. The remaining 40,000 live south of the Iber River.

KURTI CRITICIZES THE ROLE OF RUSSIA

Opposition parties in Pristina have accused Kurti of scaring investors by openly talking about a possible new conflict with Belgrade.

Kurti denies these accusations. He accused Russia, which is Serbia's main ally and has vetoed Kosovo's application for United Nations membership, of a role in fueling new ethnic tensions in the former southern Serbian province.

"The despotic president Vladimir Putin is a man of war and he would be interested in spreading the war because he wants to normalize the war," Kurti said.

Kurti and Serbian President Aleksandar Vucic are expected to meet in Brussels for more talks on August 18. Belgrade and Pristina are publicly committed to an EU-sponsored dialogue to resolve outstanding issues, but little progress has been made. Kosovo has joined the EU and US sanctions against Moscow. Serbia has not imposed sanctions against Russia despite its intention to join the EU and harmonize foreign policy with the bloc.

NATO has about 3,700 troops stationed in Kosovo to maintain its fragile peace and last week said it would intervene in accordance with its mandate if stability was threatened.

Rama from Prague: We face a dramatic emergency, the age of danger has been formalized

Gjekmarkaj talks about the meeting with Krichbaum: He is in Albania for an exploratory mission for cooperation spaces in PD

Rakipllari: Berisha is an important factor in the opposition, the electorate is not influenced by 'non-women'

"National security in danger", Noka: In addition to Iranian hackers, Russian and Serbian ones have also attacked us

Artan Hoxha releases the video: How he mediated for a 500 thousand euro fine in Shijak, Astrit Avdyli was also present

Baton Haxhiu: PD is led by Berisha, whatever the court's decision

Fight with knives in a barbershop in Vlora, three people are injured

4 toxic habits that prevent you from being happy

Tragedy inside the nursery: At least 38 victims after the extreme attack

'We grabbed the cup as if we were paying for coffee', Orgesa Zaimi shows behind the scenes with Luiza Gega

Meeting with Begajn, Bylykbashi: I was in the capacity of deputy president of the DP, the President recognized the court's decision

"100 million intercepted conversations", how the Albanian mafia cooperates with the Neapolitan criminal groups

Reporting to the File Authority, the Prosecutor's Office of Tirana dismisses Meta's lawsuit

The rumored date for the coronation of King Charles III

The release of Alqi Bllakos, the DP reacts: He gave a guarantee that he would not speak to spoil the work of the SP

Energy price increase, ERE announces Board meeting; what is expected to be discussed

SPAK against the release of Alqi Bllakos: We will appeal to the Appeal

Will Smith be supported in the new film?

The new Prime Minister of Italy letter to Berisha: The closeness with your party is historic

Kanye West mad at Hailey: Justin Bieber get your girl before I get mad

Is Meta banned from participating in the PES Congress? The Freedom Party clarifies the e-mail: It did not ask for an invitation

4 times above the average, Albanian judges and prosecutors are the best paid in Europe

Under accusation of corruption/ Alqi Blako is released from the cell

Berisha releases the survey: The opposition is moving confidently towards victory

Back at 'home', Xabi Alonso becomes a coach in the Bundesliga

Meeting of the Political Community, Rama from Prague: I hope to build something good for the people

"There were meetings with Alibeajt's group"/ Berisha opens the doors: Any deputy can run, the primaries decide

Dash Sheh's proposal: To increase salaries by 25-30% so that the youth does not take the paths of emigration

Borrell: In Prague we are creating a new order without Russia

The sensitive data of the citizens came out, Xhaçka: Cyber ​​attacks also happen in the USA and the EU

PL denounces: At the height of the crisis, the Ministry of Finance announces a 380 thousand euro tender for "propaganda services"

Duka talks about yesterday's meeting with Berisha: He received our proposals very well

The weapons base of 'May 5', the police give details, what was seized

The MP's strong statement: Martinaj was notified 5 minutes before the police went to the hotel

Albanians in dinghies towards Britain, Chuçi denies: They are not fleeing from Albania, but from European countries

Interpellance/ Salianji mocks Çuçi: Thank you that we found you and announced you as wanted. What are the measures for crime?

The most followed on Facebook, Berisha wins the duel with Rama, leads with 57.88%

Gun attack in a preschool center in Thailand / At least 31 killed, among them 23 children

Balla after the meeting with Begaj: We are ready to enter the elections on any date

Cyber ​​attacks, Rama says he was ready to bring NATO to war with Iran

Elbasani/ 3.5 million euros of assets are seized, it is suspected that they have benefited from criminal activity

EU Ministers: The financial objective to curb climate change will be reached in 2023

Today in Prague, the European Political Community is presented, what we know about this initiative and the questions

The ship with immigrants from Africa sinks in Greece, 16 women lose their lives

Payments for private kindergartens are tightened, in 3 years it has increased by 45%

Bozdo: The protests are part of a larger strategy

"Family friendly in SPAK", Kryemadhi: if they open the grave of the father, they will not find anything undeclared

Teachers' protest, VOA: The start of the new academic year in Albania is at risk

BIRN reporter: A member of organized crime became an MP

Multiple accident on the Lezhë-Milot highway, suspected to injure

Nard Ndoka: The most disappointing politician in Albanian politics. It has created a very large cost for DP

The former legendary goalkeeper of the Albanian National Team is gone

Appeal decision for DP, Bushati: The court is behaving in a scandalous manner, it is known who has the majority in the party

The unluckiest zodiac sign for the month of October

Berisha meets the leaders of allied parties: In local elections with a joint candidate

Pink October, Vokshi: 220 women have lost their lives in the last 5 years due to improper health care

"It's the end of abuse", Berisha: Check-up of Rama's cousin receives a million euros and does nothing

Pink October, Berisha appeals: In Albania it is the 4th most frequent form, prevention is the best way

The well-known businessman from Kosovo buys ABC television in Tirana

The American Lottery starts tomorrow, what you need to know before you apply

Gigi Hadid blasts Kanye West: You're a bully and funny

Forensics expert: It is suspected that 3D weapons are produced in Albania, criminal groups are training in polygons

Delinda Disha tells about the moment when, after the abortion, she had to play the role of a woman who lost her child

The government appoints the head of the Concessions Handling Agency

Sejko: Inflation rose up to 8% in August, the economy suffered a decrease in the last three months

The European U-19 for girls, Albania starts with a triumph over Latvia

Rihanna talks about her performance at the "Super Bowl": I'm nervous, but excited

Fiscal amnesty, Sejko: The risk of money laundering and concealment of income must be avoided

The decision of the Appeal for DP, Lela: The opposition in any form should come together

The robbery of Rinasi, the GJKKO gives the verdict for the perpetrators

Anti-tank, sniper, Kalashnikov/ There is a weapons base in the area of ​​'May 5' in Tirana

Cate Blanchett says harsh criticism has made her a better actress

Small business in the meeting with Berisha: Protests and strikes, the government must be stopped!

Artan Hoxha releases the video: How he mediated for a 500 thousand euro fine in Shijak, Astrit Avdyli was also present

Journalist Artan Hoxha has published a video of how some people filed by justice are negotiating for a fine of 500 thousand Euros. He said in the Opinion sho...

SPAK against the release of Alqi Bllakos: We will appeal to the Appeal

The Special Prosecutor's Office Against Corruption and Organized Crime has opposed the release of former socialist MP Alqi Blako. In a reaction to the media,...