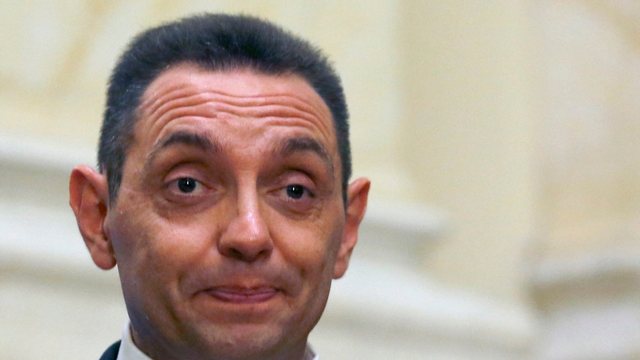 Aleksandar Vulin, who served as Serbia's interior minister in the previous government and previously held the post of defense minister, took over as director of BIA, Serbia's intelligence agency, the Serbian government announced in a statement.

As Serbia's interior minister, Vulin visited Moscow in August, a rare visit by a European state official that underscored Belgrade's refusal to join Western sanctions against Russia over its aggression in Ukraine.

He told Russian Foreign Minister Sergey Lavrov during that visit that "Serbia is the only country in Europe that has not imposed sanctions and has not become part of the anti-Russian hysteria."

Serbia, which is officially seeking membership in the European Union, has been deviating from its path to the EU for years, turning to its traditional Slavic ally, Russia, as well as China.

Aleksandar Vulin is considered "the man from Moscow" within the Serbian leadership. His appointment to such a sensitive intelligence post is seen as another snub to the West and its calls for Serbia to harmonize its foreign policies with the EU if it really wants to join the bloc.

"The appointment will completely sever" the BIA's cooperation with Western security agencies and contribute to Serbia's "further international isolation," the opposition Free Citizens Movement party said in a statement, noting that Vulin "protects openly pro--(Vladimir) Putin positions" and that his appointment defines Serbia "as Russia's only ally in Europe".

Marinika Tepic from the Freedom and Justice Party said that she is convinced that the appointment of Vulini "shows that Serbia is moving towards a dictatorship" in which "all means will be allowed in the fight against political opponents".

A. Vulin has said that Serbia should abandon its EU membership efforts and turn to Moscow, often attacking Serbia's neighboring countries and their leaders and calling them derogatory names. He has been banned from entering Croatia, a member of the EU.

He has advocated the creation of a so-called "Serb World" - a copy of the "Russian World" - that would unite all Serbs in the Balkans under one banner led by Serbian President Aleksandar Vucic.

Last year, Vulin reportedly set up a "working group" with Nikolai Patrushev, the Kremlin's powerful Security Council secretary, to fight "color revolutions" - a series of mass protests that sometimes lead to the overthrow of largely autocratic regimes in the Middle East and Asia.

Independent Serbian media had reported that at their meeting in Moscow late last year, Vulin handed Patrushev wiretapping from a meeting in Belgrade of members of the Russian opposition.

Shortly after the Belgrade meeting, several participants were arrested in Russia. Vulin denied handing over the wiretapping to Patrushev. VOA

illustrative photo A serious accident resulting in the death of one person occurred this Sunday in Gjirokastra. It is learned that the incident took place ...

The British media 'Mirror' has devoted an article to the Albanian gang "Hellbanianz", known in the United Kingdom as the most famous. According to the 'Mirro...