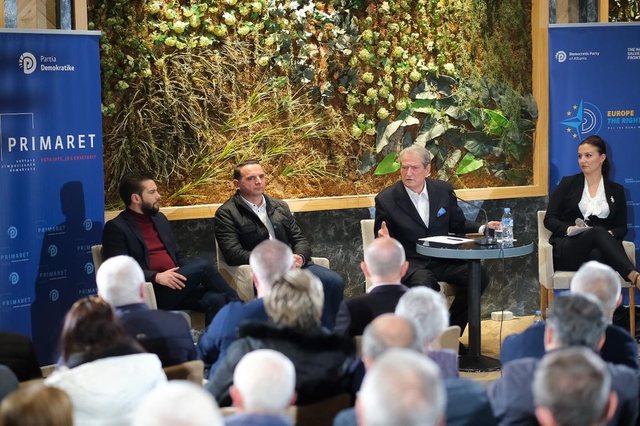 The head of the Democratic Party, Sali Berisha, declares that with the protest of December 6, it will be shown to the members of the EU that Albania is the most corrupt country in Europe.

You see, who made drugs in Albania. 3 drug ministers are appointed one after the other in the Ministry of Interior. Even the one who is today is up to his ears in drugs, because he is Edi Rama, because they did not appoint the citizens, but Edi Rama.

Because it adapts the drug platform. Then we, the citizens who suffer the consequences of this policy, cannot be on that day, except in the square. To tell them, outstanding men and women, that we are not drugs and crime. Crime is what you have on the table. We are against crime, against drugs ," said Berisha in a meeting with residents of Unit No. 7 in Tirana.

According to him, Prime Minister Rama is undoing Albania, referring to the case of the Port of Durrës.

"There is an Arab who has a passion for investing in dictators, with Llukashenko and others, he says to Edi Rama, I will make you rich like myself. Come let's take this port together.

No invader has taken the port from the Albanians.

Today, the port is the biggest public asset of Albanians. It processes 4.8 million tons. He distributes them in the heart of Albania, where there are almost 2 million Albanians. Shorter distance, lower shipping and cost due to distance.

Now, we will buy goods because Edi Rama will become a billionaire, which are transported from Tivari to Tirana, from Thessaloniki to Korça, from Igoumenica to Vlora and Gjirokastër.

Who will pay the cost of this transport? We, the citizens with prices in the store.

How does he get 200 hectares of land for 1 euro, he has set the price of apartments at 3000 euro per square meter. Similarly, the hotels and malls in Durrës, he builds his Dubai and the misery of the Albanians.

Now he says he will build a port, but he has no intention of building a port. He intends to close the ports, as an anti-Albanian and he closed them, he has closed Saranda, Vlora yes, Durrës now and long live Shengjini, but Shengjini has great restrictions, it is a small port.

So this is undoing Albania geographically as well.

Berisha: Yuri Kim has been the promoter of corrupt tenders without competition

"Resignation is an obligation", the opposition publishes the slogan of the February 11 protest

Investigative commission for 'McGonigal', Berisha: We will also make contact with the US Congress

The "Rama-McGonigal" scandal unifies the PD, they sign the establishment of the Investigative Commission, who will be at the protest

Killed in France, the Albanian is sentenced to 20 years in prison

The "McGonigal" scandal, DP submits to the Assembly the request for the establishment of the Investigative Commission

The new judicial map, DP: Judge Zhukri's decision is not registered in the party register by order of Rama

Get money for the scanners, two doctors are arrested at QSUT

About 40 countries may boycott the Olympic Games

Baton Haxhiu recounts the trip to Kiev with Rama and Ducka: I was impressed by his bags

A person died in a motorcycle accident in Durrës

Avoiding the confrontation with the opposition in the Parliament for the "McGonigal" scandal, Rama "appeared" on three TVs from his office

Britain does not give up the deportation plan in Rwanda, Sunak talks about a new 'agreement' with Albania

The car hits the young man to death in Tirana, the victim is the son of Kudret Saliaj

Berisha: Rama under investigation for the "McGonigal" case

The Kosovar politician and journalist, Milaim Zeka, has made a shocking statement, related to the recent scandal of the former FBI official, Charles McGonigal...

The Transparency Horn has changed fuel prices again. Oil has decreased by two lek, where from 192 lek/liter that was set the day before, it will be sold at 19...

The head of the DP, Sali Berisha, declares that the 'McGonigal' scandal will not pass like other issues. In a conversation with citizens on Facebook, Berisha...