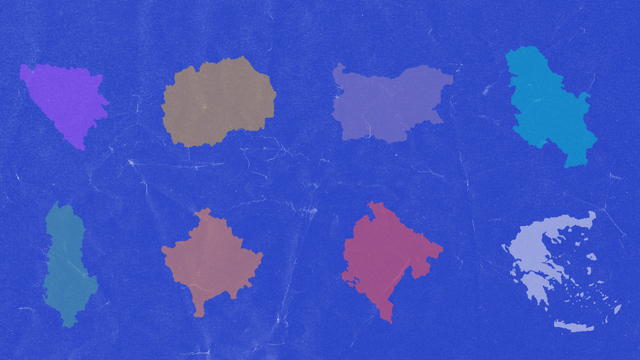 Economy, politics and inequality are the main concerns for young people in the Balkans, some of them told BIRN in interviews on the occasion of International Youth Day on August 12.

"I feel trapped. To be born here means to be born with the burden of the past which is also your present. All because cooperation and reconciliation are words long forgotten by our leaders,” said Selena Gjuric, 24, a student and human rights activist from Serbia.

She is one of eight young people from Kosovo, Serbia, Albania, Macedonia, Bosnia and Herzegovina, Bulgaria, Montenegro and Greece who spoke to BIRN on the occasion of International Youth Day, answering: "How does it feel to be young in the Balkans?"

In their interviews, they expressed bitter feelings. Anxiety and anger about the current situation is common, along with a deep lack of trust in politicians and institutions, said Oksana Duqi, 23, from Albania.

She loves her country, but explains that, "as for the main politicians of the state, they do not give anyone hope that they can implement policies for the benefit of the citizens. I try to avoid them, to save myself headaches and energy".

The sentiment is shared across the region. According to data presented in a Shared Futures report by the United Nations Development Program UNDP for International Youth Day last year, young people's satisfaction with their countries' governance systems and institutions is relatively low across the region. .

Asked to rate their government, parliament, judiciary, police and media on a scale of 1-5, with 1 being the lowest score, young people's average score ranged from 1.8 to 3, depending on the country.

"Living in Kosovo is like painting a sunset from a prison window. We watch the West on TV, on social media and read about it, but we are not allowed to touch it," said Gelonida Bajraktari, a 24-year-old from Prizren who lives in Kosovo's capital, Pristina.

"We see them run free, build great things and live up to their potential, while we build houses of cards lit by a candle that could burn us all down," she added.

Given the lack of trust in institutions and the region's high youth unemployment rate of around 33 percent, it's no wonder brain drain is a real problem for the area.

According to the latest Balkan Barometer report, 67 percent of young people across the Balkans are considering leaving their country and working abroad. The numbers are huge, but this is seen as a major concern by only 18 percent of the general population.

"Wherever you go in the world, the story is similar. Activism for human rights, animal rights and environmental protection are imperative. I decided to localize my fight for rights and justice mainly in my native region", said Edi Frcovski, biology student and human rights activist from North Macedonia.

"Being young in the Balkans is definitely challenging, but I couldn't imagine myself growing up anywhere else," admitted Dzulisa Otuzbir, 27, a new European Ambassador from Sarajevo.

"There are many things that need to be changed or improved, but growing up and living here have made me a strong and resilient young woman," she told BIRN.