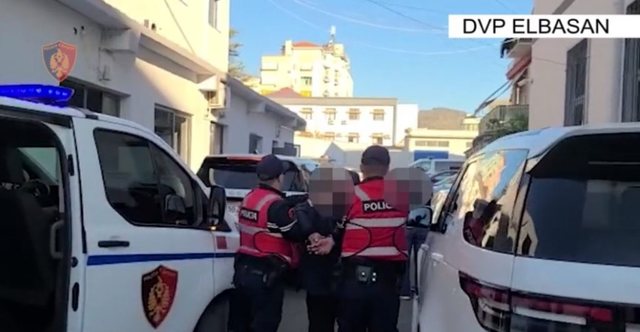 The police of Elbasan seized 10 kg of cannabis and 1 pistol.

Thanks to the "Axis" coded operation, three people were arrested, including a girl, and 5 others were wanted.

"/Finalized, after a month-long investigation developed with proactive methods, the coded police operation "Axis". 10 kg of cannabis and 1 pistol firearm were seized.

The operation was carried out by the Section for the Investigation of Illegal Traffic and Narcotics, in cooperation with the Special Operational Force of DVP Elbasan, under the direction of the Elbasan Prosecutor's Office.

They were caught transporting by vehicle, 10 kg of cannabis narcotics, from Korça towards Elbasan, 2 citizens were arrested.

Their accomplice was also handcuffed, in whose apartment the Elbasan Police found and seized a pistol and a small amount of cannabis in the form of chocolate.

5 other citizens are wanted, suspected to be involved in these criminal activities.

The structures of DVP Elbasan, following the work for the prevention, identification and attack of criminal activities in the field of narcotics and illegal possession of weapons, supported by information intelligence, after a month-long investigation developed with proactive methods, under the direction of the Elbasan Prosecutor's Office, have successfully completed the coded police operation "Axis".

During the operation, the Police services stopped the "Audi" type vehicle, driven by citizen L. Gj. and female passenger BF During the check in the trunk of the vehicle, 10 kg of suspected narcotic cannabis sativa were found, which these citizens were transporting from Korça to Elbasan.

In the vicinity of this vehicle, the citizen GP was caught and detained, who from the investigative actions has turned out to be a collaborator with the 2 aforementioned citizens.

During the search in the residence of the citizen GP, ​​the Police services found a pistol and a small amount of suspected narcotic substance cannabis sativa, in the form of chocolate.

The firearm, pistol, 10 kg of cannabis and the "Audi" type vehicle were seized as material evidence.

Following the in-depth investigative actions, it was found that 5 other citizens are suspected to be involved in this criminal activity, who were declared wanted. The work for their capture continues.

We are working on the complete documentation of the criminal activity of these citizens.

The materials were passed to the Prosecution at the Elbasan Judicial District Court, for further actions."

Investigations into Ndoja, the former prosecutor has been the 'target' of assassinations several times

US officials show how the association should and shouldn't have been

US official: The drone attack on the Iranian factory appears to have been carried out by Israel

The McGonigal scandal, the former minister tells why Rama does not resign: He knows what awaits him

Bosnian media releases the document: Vucic was banned from entering the EU after the war in Kosovo

Albanian couple has an accident in America, the pregnant woman dies

Former police chief: How the security cameras deconstructed the operations in Fushë-Kruje

The McGonigal, Kelliçi scandal: It turns out that Erion Veliaj is also involved

Scholz refuses to send planes to Ukraine: I will not allow NATO to get involved in the war

Erdogan does not back down/ Gives 'ok' to Finland, blocks Sweden's path to NATO membership

Expert: 1 million cameras deployed by criminal gangs across the country

The government postpones the deadline for the concession of fiscal stamps, businesses will continue to pay fees 10 times higher than the EU

Frost and fog, the weather forecast for today

After Berisha, Alibeaj also submits the list of members of CEAZ for the elections

Berisha publishes the message: Rama has been on an island for three days, being questioned by FBI investigators

The last session of the plenary session in the Assembly was accompanied by tension, exceptions and the approval of the agenda without the votes of the opposit...

The American journalist of the 'New York Post', Miranda Devine, has focused on the involvement of Prime Minister Edi Rama with the former FBI agent, Charles M...

Prime Minister Edi Rama has reappeared to the public today after several days of absence, since the revelation of the scandal of former FBI official Charles M...