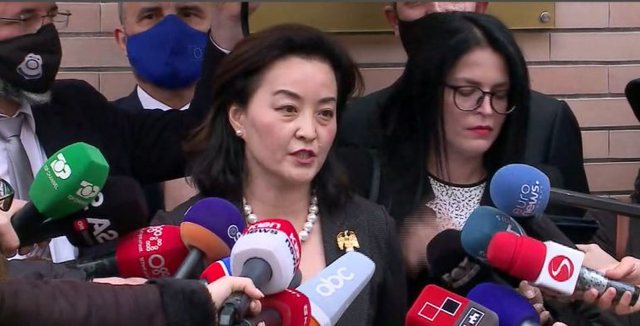 "Something unacceptable for a country that is a member of NATO and aspires to join the EU." This is how the US Ambassador to Albania, Yuri Kim, described the act of the Democratic Party for setting up special structures for the protection of the vote, referring to yesterday's murder in Elbasan.

In a statement to the media after meeting with CEC chief Ilirjan Celibashi, the US diplomat called on political parties to ensure a smooth election process on April 25. Yuri Kim stated that the terrible things that have happened in the past, should be left behind, because according to her, these are elections for the future of Albania.

"We are all concerned by the news of what happened yesterday, it is important that the perpetrators can be caught so that everyone can be punished without exception. There is no special or special treatment for anyone because no one is above the law. As many people have pointed out, the April 25 elections are about the future, not the past. Such horrible things as have happened in the past, as unauthorized groups to protect the vote of the citizens, must remain in the past. This is unacceptable for a country that is a member of NATO and aspires to join the EU. It is the responsibility of the leaders, who are in the highest leadership positions of the country, to call for calm, to ensure that there will be calm and that there is no incentive for anything else that has nothing to do with calm. We are monitoring all actions taken by the country's leaders. Thank you Mr. Rama and Mr. Basha, who have called for calm and not to accept violence, as well as to be able to vote on April 25. "Let me emphasize what I have said since I came to Albania, he wanted to address the Albanian voters: You are not alone, we are with you" , said Ambassador Kim.