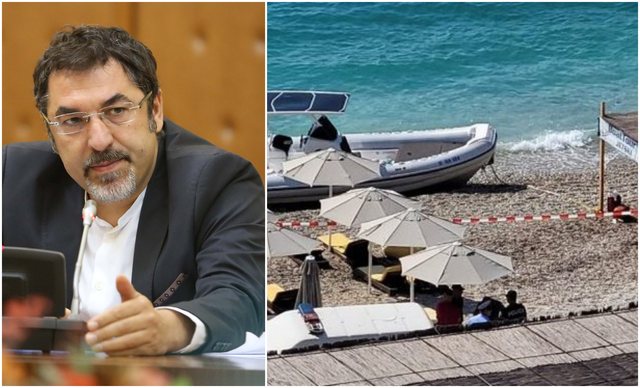 Interior Minister Bledi Çuçi is one of the two ministers whose resignation is demanded, as responsible for breaking the rules for driving water motors, one of which took the life of 7-year-old Jonada Avdia in Himare.

However, Çuçi has not made any reaction to the little girl even though 7 days have passed since the tragedy. The Minister of the Interior today congratulated the anti-drug operation where 1 ton of marijuana was seized in cooperation between the State Police and the Guardia Di Finanza.

While echoing the operation, Çuçi writes on Facebook that "we remain frontally determined to continue the constant fight against evil, with the conviction that only in this way we create security for society and guarantee our future."

"Today's international operation in Vlora between the State Police and the Guardia Di Finanza to strike a drug trafficking group with watercraft and seize about 1 ton of marijuana, is another significant proof of professionalism and strike force without any compromise against organized crime. Congratulations to all Albanian and Italian officers who participated in this well-coordinated operation by air, sea and land. We remain frontally determined to continue the continuous fight against evil, with the conviction that only in this way we create security for society and guarantee our future", writes Çuçi.

Even the Minister of Tourism Mirela Kumbaro reacted 24 hours after the tragedy. Kumbaro expressed his condolences to the family and asked for maximum punishment for the perpetrator. Although the request of the civil society for her resignation was made the day before, the minister did not respond.

"Extreme pain for the terrible event on the coast of Himara, where an angel is no longer among us because of the stupidity of a man who broke every law, every rule and every norm with tragically irreversible consequences! With the awareness that there are no words to serve as consolation for the parents, the family for the tragedy they suffered, the request goes to the Justice to do its job, without any compromise, with maximum punishment for anyone who breaks the common laws and rules and endangers to cause loss of life, whether on land or in water! The request goes to the State Police as well, to each of its employees in the territory, to be at the level of vigilance and punishment that the uniform imposes on them for the performance of their duties. May little Jonada rest in peace" , wrote Kumbaro on Twitter.

Jonada Avdia tragically lost her life while she was on the shore of Potami beach in Himare. The 7-year-old girl was hit to death with a speedboat by Arjan Tase, a former officer of the State Police. Tase was left in prison under the charge of "Deliberate murder".

Today at 19:00 in front of the Ministry of Interior, the next protest will take place to demand justice for Jonada.