Vlora people lost 6,700 votes to SP, but the fall of SMI saved their mandate 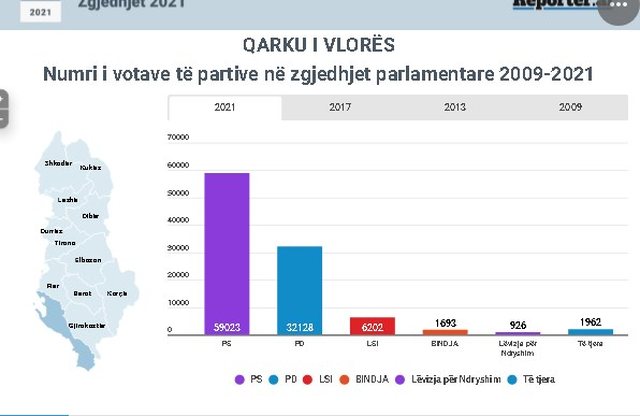 The Socialist Party won fewer votes than four years ago in the Vlora Region, while the opposition Democratic Party achieved one of its best results, in the traditionally socialist stronghold of the region. However, the SP managed to retain its eighth term due to the fall of the SMI, which failed to win a seat.

Prime Minister Edi Rama was the most voted candidate in Vlora in terms of like-minded votes with 11 thousand votes, while the Minister of Finance, Anila Denaj was positioned second with 6400 likes. Denaj also defeated Damian Gjiknur, who was responsible for the SP campaign in the region.

The director of the Selenica bitumen mine, Gëzim Ademaj, managed to get almost 3,300 votes, more than twice compared to the fourth PD deputy, Arbi Agalliu. Despite this, Ademaj will not be an MP. In addition to Ademaj, three other Democratic candidates received more votes than Agalliu. About 80% of DP and 83% of SP voters voted in favor of the MP candidates, except for the party in this district.

The final election result gave the SP 8 seats and the DP 4 seats, almost unchanged compared to 2017 when the PD and LSI had won 4 seats together. The closest result between the parties was recorded in 2009 when the SP and the PBDNJ, then in alliance with the SP, won seven seats together while the PD and PDIU won five seats.

Vlora is also the region with the absolute lowest turnout in the elections, a turnout that fell even lower on April 25th. Out of 318 thousand voters in the voter list, only 106 thousand went to the polls and out of these, 4700 turned out to be invalid votes. Participation in Vlora fell from 36% to 33%. Over the last four years, the number of eligible voters has increased by 10,000 in the county and despite this, 4,000 fewer voters turned out at the ballot box than in 2017.

Three of the twelve deputies of Vlora, two from SP and one from PD are women, or 23%. Birn